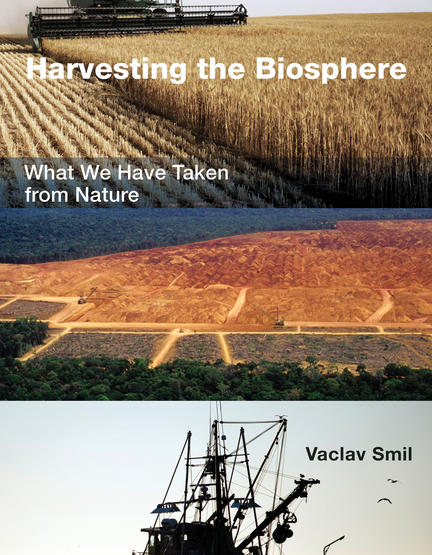 An interdisciplinary and quantitative account of human claims on the biosphere's stores of living matter, from prehistoric hunting to modern energy production.

The biosphere—the Earth's thin layer of life—dates from nearly four billion years ago, when the first simple organisms appeared. Many species have exerted enormous influence on the biosphere's character and productivity, but none has transformed the Earth in so many ways and on such a scale as Homo sapiens. In Harvesting the Biosphere, Vaclav Smil offers an interdisciplinary and quantitative account of human claims on the biosphere's stores of living matter, from prehistory to the present day. Smil examines all harvests—from prehistoric man's hunting of megafauna to modern crop production—and all uses of harvested biomass, including energy, food, and raw materials. Without harvesting of the biomass, Smil points out, there would be no story of human evolution and advancing civilization; but at the same time, the increasing extent and intensity of present-day biomass harvests are changing the very foundations of civilization's well-being.

In his detailed and comprehensive account, Smil presents the best possible quantifications of past and current global losses in order to assess the evolution and extent of biomass harvests. Drawing on the latest work in disciplines ranging from anthropology to environmental science, Smil offers a valuable long-term, planet-wide perspective on human-caused environmental change.

Vaclav Smil is Distinguished Professor Emeritus at the University of Manitoba. He is the author of forty books, including Power Density: A Key to Understanding Energy Sources and Uses and Made in the USA: The Rise and Retreat of American Manufacturing, both published by the MIT Press. In 2010 he was named by Foreign Policy as one of the Top 100 Global Thinkers. In 2013 Bill Gates wrote on his website that “there is no author whose books I look forward to more than Vaclav Smil.”

There's no author whose books I look forward to more than Vaclav Smil.... In Harvesting the Biosphere, Smil gives us as clear and numeric a picture as is possible of how humans have altered the biosphere.—Bill Gates, The Gates Notes—

Other titles by Vaclav Smil

A Brief History of Hype and Failure

How the World Really Works

The Science Behind How We Got Here and Where We're Going

How the Modern World Was Made

From Microorganisms to Megacities

A Key to Understanding Energy Sources and Uses

Made in the USA

The Rise and Retreat of American Manufacturing

The History and Impact of Diesel Engines and Gas Turbines