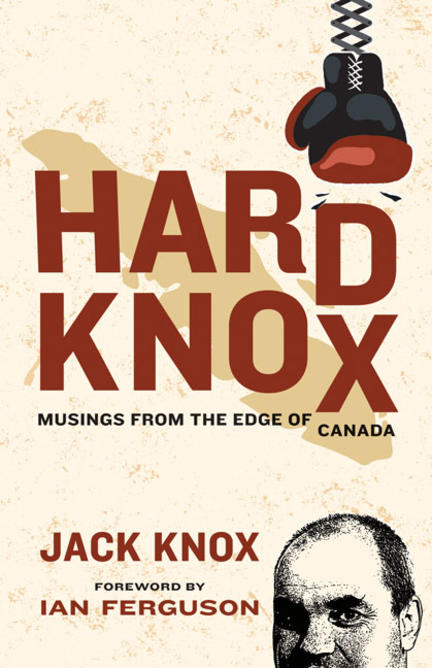 In Hard Knox, seasoned columnist and consummate everyman Jack Knox offers up his uniquely hilarious views on Canadian life as seen from the western fringes of the country—in particular from the “Island of Misfit Toys” as he aptly calls his Vancouver Island home. This treasure trove of west-coast wit and wisdom touches on everything from “smug anti-Americanism” to extreme weather to flagrant public displays of affection in Canada’s westernmost capital. Whether you’re a born-and-bred Islander, a transplanted Albertan in the throes of culture shock, or a confused tourist, we all have something to learn from the school of Hard Knox.

Jack Knox is the author of two bestselling humour books, Hard Knox: Musings from the Edge of Canada and Opportunity Knox: Twenty Years of Award-Losing Humour Writing, both based on his popular column at the Victoria Times Colonist and both long-listed finalists for the Leacock Medal for Humour. His latest book is On the Rocks with Jack Knox: Islanders I Will Never Forget. Knox’s career highlights include being blasted with blowhole spray by Luna the orca whale, interviewing a nude porn star, and getting a phone call from Barack Obama four days before the 2008 presidential election. In his spare time he performs in a rock ’n' roll band with members of his Tour de Rock cycling team.

Ian Ferguson won the Stephen Leacock Medal for Humour for his book Village of the Small Houses and is the co-author, with his brother Will Ferguson, of How to Be a Canadian, which was shortlisted for the Leacock and which won the CBA Libris Award for non-fiction. He was selected for inclusion in the Penguin Anthology of Canadian Humour, was a contributing essayist to Me Funny, an anthology of Aboriginal humour, and has had his writing published in the Globe & Mail, the National Post, Reader’s Digest, Maclean’s, and EnRoute, among other publications. For the past ten years, he has worked as a writer and creative director in the film and television industry.

Hard Knox may cause dizziness, light-headedness, coughing fits, and sore ribs from laughing. If conditions persist after 224 pages, consult your bookseller about a sequel.

There is not a hint of superiority or condescension in [Knox's] writing.

You want funny? You've come to the right place. This is Jack Knox, hier apparent to Stephen Leacock, at his high-flying best. Witty, wry, breezy and wholly original, Knox wields his humour with a deft hand and a sure grip. Canada needs more Knox!

Will Ferguson, three-time winner of the Leacock Medal for Humour

Jack Knox isn't just a words guy, although that's important. He's also a guy with an eye (okay, two) for the inane and a mind geared to asking, 'What if?' And that's where the words come in, because he takes all that stuff, bounces it off the wall, and cranks out observations always amusing, mostly spot-on, and often fall-down funny. Plus, he doesn't think proper grammar is grandpa's prissy wife. Ain't a lot of that left.

Jim Taylor, author of To Think I Got in for Free! Highlights from Fifty Years on the Sports

This book should come with a 'laugh-or-double-your-money-back' guarantee, or a 'hurting from laughter' warning. And, although the full title is Hard Knox: Musings from the Edge of Canada, you don't have to be a resident of Victoria or a citizen of Vancouver Island (these can be mutually exclusive) to enjoy it. This is a book that will make all of Canada laugh.

“[Knox’s] use of humour with an edge enables new understandings of the workings of ordinary days, and his regular comedic comparisons help readers see things in a new light. … [W]ell worth reading!”

There are a few key secrets to a happy life in Victoria—avoiding downtown when the cruise ships are in, knowing exactly how late you can get to the ferry terminal, and reading Jack Knox.

Whether he's addressing his city's sewage crisis, offering a rhapsodic ode to Nanaimo bars or noting that millennials and elders are now willing pay more for their bikes than their cars, Knox charms with his curmudgeonly wit and satirical eye.

Jack Knox is one funny guy, but don't let the wordplay and wit fool you. He's a sharp and savvy observer of the Vancouver Island scene, and his affection for the place and its people shines through in his writing.

Other titles by Jack Knox

More Musings from the Edge

On the Rocks with Jack Knox

Islanders I Will Never Forget

Other titles by Ian Ferguson

The Survival Guide to British Columbia

Village of the Small Houses, The

How to Be a Canadian

Even If You Already Are One

by (author) Will Ferguson & Ian Ferguson

Village of the Small Houses