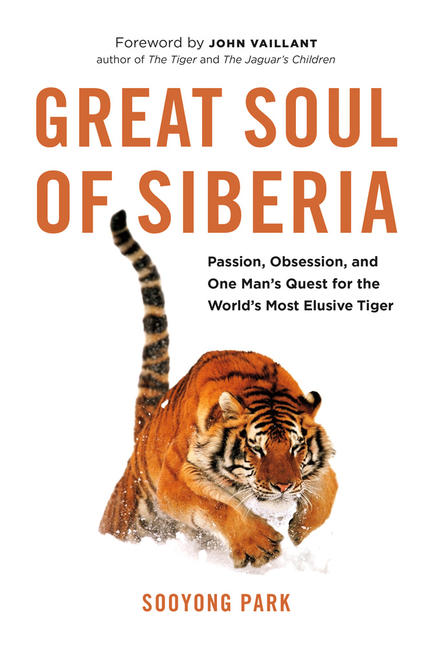 "Great Soul of Siberia is the most intimate, poetic and immersive investigation of the Siberian tiger ever written." —John Vaillant, author of The Tiger and The Golden Spruce

The remarkable story of one man’s all-consuming quest to follow three generations of Siberian tigers, and the tigers’ struggle to survive in a harsh landscape marked by poachers and a disappearing habitat.

Renowned tiger researcher Sooyong Park, a man who has dedicated much of his life to these amazing animals, reveals the heart of his work in Great Soul of Siberia. Like a cross between Jane Goodall and Timothy Treadwell, he fearlessly immerses himself in the lives of a family of notoriously reclusive Siberian tigers, following them across azalea-strewn mountains and painfully staking out through frigid Russian winters in underground bunkers to watch them. Inevitably, Park becomes emotionally and spiritually attached to these beautiful but dangerous apex predators and draws on more than twenty years of experience and research to describe the tigers’ losing battle against poaching and a diminishing habitat.

Sooyong Park is an award-winning documentary filmmaker who has devoted over twenty years to studying and filming Siberian tigers. His groundbreaking tiger research was the subject of the award-winning film Siberian Tiger Quest, which aired on PBS. He lives in Seoul, Korea.

John Vaillant's work has appeared in The New Yorker, The Atlantic, and National Geographic among other magazines. His books, The Tiger and The Golden Spruce, were international bestsellers. His most recent book, The Jaguar's Children is his first novel.

“A courageous and eloquent adventurer, Park is truly a kindred spirit of the magnificent Siberian tiger, and a compassionate steward of its environment." —Jewel Palovak, co-executive producer of Grizzly Man

"Sooyong’s magical prose led me into little-known and breathtakingly beautiful forests, exposed me to the bitter cold of long winter months, and revealed the secret life of that most mysterious of cats, the Siberian tiger." —Jane Goodall

"Park’s close engagement with the forest ecology is the most extraordinary element of this remarkable book." —The Explorers Journal

"This book is an unbelievably gripping account of one man's laser-focused determination to find, film, and understand one of the rarest and most formidable cats on earth. Not only is Sooyong Park's story astonishing—it's also shared with such intense emotion that you feel you're right there with him." —Chris Morgan, Ecologist, host of Siberian Tiger Quest

“One man’s fascinating account of what it’s like to live in a frozen world most of us can barely imagine, in the presence of one of the most magnificent and mysterious animals on earth." —Geoffrey C. Ward, author of Tiger-Wallahs and The Year of the Tiger

"An astonishingly intimate peek into a family of the greatest of cats, and a man in love with watching them. Sooyong Park has felt the breath of a wild Siberian tiger on his cheek, and so will you." —Will Stolzenburg, author of Where the Wild Things Were

"A heartfelt memoir that reflects the author's respect and love for a wild and pitiless world." —Kirkus Reviews

"He is a rare scientist who infuses his text with a poetic touch." —The Explorers Journal

"A beautiful book, and the best account of Siberian tigers I’ve read. Park’s remarkable first-hand observations of a wild tiger family contain the wisdom of his years of experience and are written with great verve, intelligence, dedication, and understanding." —Jeffrey Masson, author of When Elephants Weep

"A beautifully patient, deep-textured exploration of an unknown part of the world and its ancient guardian, the majestic Amur tiger, by a wonderfully empathetic naturalist." —Ruth Padel, author of Tigers in Red WeatherandWhere the Serpent Lives

"...filled with photographs and the certainty that tigers are among the most intelligent, sophisticated and beautiful animals on Earth. To read it is to hear the voice of a remarkable man." —Katherine Rundell, author of the novel The Wolf Wilder

Other titles by John Vaillant

The Making of a Beast

Lines on a Map

A True Story of Vengeance and Survival

A True Story of Myth, Madness and Greed