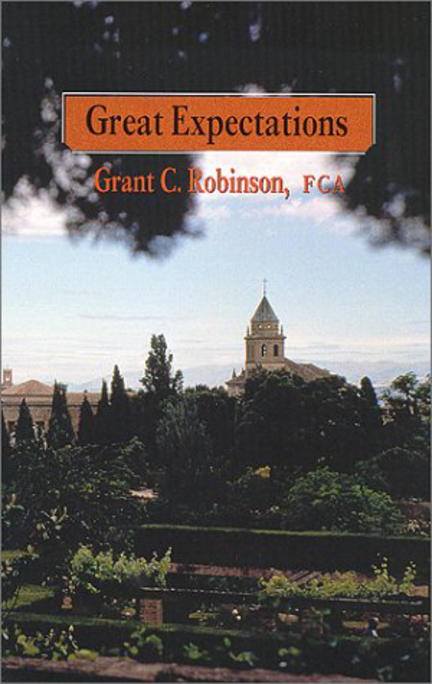 Thom and Sophie are forced to consider their future, to turn dreams into language, to talk to each other, to listen, to think and, not co-incidentally, to put a dollar value on Penmaen Lithography ... to put a price on their personal sense of pride.

Grant Robinson was born and educated in Guelph, Ontario, where he earned his degree in Chartered Accounting (CA) in 1976. A year in Bermuda under the auspices of Morris and Kempe convinced Grant and his doubles partner, Sheila, that Wellington County was actually a better place to raise a family than they had realized, just as the young couple's one attempt to grow forty acres of corn convinced them of the utter necessity of crop insurance.

Grant Robinson is the CEO of Robinson & Company, Chartered Accountants, a consulting group which facilitates the transition of family businesses from one generation to the next. Grant is active within the community and was awarded a Fellowship of the Ontario Institute of Chartered Accountants (FCA) in 1991. Great Expectations is his first book-length publication.

If you're looking for a summer getaway, get a copy of Great Expectations, find a quiet spot, and enjoy.

This is a yarn in the tradition of Stephen Leacock's Sunshine Sketches, but also one in which author Grant C. Robinson puts his own particular spin on the passing parade. The plot is straightforward. It's the people -- endearing, exasperating and often eccentric -- that make it special.

Thom and Sophie Penmaen operate a small book printing company in the southwestern Ontario village of Glendaele. They're still regarded as newcomers, having only been in the village for about fifteen years and having both come from academic backgrounds.

The print shop boasts various pieces of old equipment. Thom is the expert at keeping the temperamental machines running. Sophie knows how to keep him at his various tasks. But neither knows how to manage people. Their four employees, each a character in his or her own right, would probably unite and demand changes if only they could get along with each other.

Business isn't bad, though it would be better if their customers paid their bills on time. There's a problem with fluctuations in the electricity supply, but the Glendaele PUC successfully sidetracks Thom's complaining with its suffocating bureaucracy.

Being their own bosses means Thom and Sophie work longer hours than their employees, including weekends, and never get paid holidays. But they have that independent spirit that keeps most small business operators going against long odds.

A former poet himself, Thom takes pride in the obscure poetry books his presses turn out. He and Sophie take their dog Kit Carson for long walks along the bank of the Credit River and discuss their lives, which by and large they find to be, if not spectacular, at least reasonably fulfilling. Sophie tends to agree with their secretary, Jayne Beauregard, that Thom is 'bizarre, unfathomable, and possibly even hopelessly male,' but the two are nonetheless devoted to each other.

Then one day they get a call from a mannamed Geoffrey Bowles. Bowles is a front man for millionaire financier Galen Nicholas Aldebaan. After sparring with a curious Thom over lunch, Bowlesfinally drops a bombshell -- Aldebaan wants to buy Penmaen Lithography and make it a part of a horizontally integrated communications company.

Everything is changed. Sophie is frightened. What about our future security if we sell, she wonders. What about it if we don't, Thom responds. She decides to tell the employees about the possible sale, arguing that it's only fair. Thom warns that they'll all demand a piece of the Aldebaan fortune. Sure enough, they do. Led by pressman Phillipe LeBounbon, the least content of the four malcontents, they begin by demanding big raises and permission to rewrite the questions in their annual job evaluations.

The tension grows in the tiny plant as Thom and Sophie try to establish a price for their business. The exercise leads to evaluations of things other than their two creaky buildings, ancient machines and outstanding accounts receivable.

The village and its people have become part of them. Even their unconventional neighbour Gail Wicket would be missed. Sophie calls her the 'Wicket Witch of the East' because she rails at them to give her a parking space on their property. She's taken to leaning out an upstairs window bare-breasted whenever Thom appears outside.

Finally Thom and Sophie fly off to Spain for a short vacation, hoping to reach a decision about selling. Things don't go well. Thom leaves his wallet on the airplane, and then gets them lost when they're supposed to be part of a sight-seeing tour. But they do finally reach an understanding of what's really important to them, just in time to arrive home to a surprise announcement about the proposed communications company.

Nothing really happens in this delightful book, except life. The affectionate bickering between Thom and Sophie, their feelings for their business and the dream that brought them to the village, even their tenuous relationships with their idiosyncratic employees -- they're all the stuff of everyday living. We see ourselves in these lives, and are the better for the feelings ofhumanness they convey.

The author is a chartered accountant with small town business experience in his own background. He's also a writer with a talent for understated humour, which is the element that makes this story work.

The publisher is The Porcupine's Quill, a small business in rural Ontario known for its high quality work. This book is actually sewn in a traditionalbinding style few if any other publishers still use. It's a treat to read, and hold, all for just $19.95 in paperback.'

'Besides borrowing Dickens' title, Robinson follows in the Victorian master's footsteps by populating the book with unforgettable character names -- Jake Wellcock, Rebeca Labellarte and a succession of lithography pressmen, Young Lucky, John Barleycorn and Philippe LeBoubon. They stand on the shoulders of their Dickensian antecedents: Abel Magwitch, Uncle Pumblechook and Mrs. Biddy Gargery. At the pinnacle of the name game stands the exotic Galen Nicholas Aldebaan, founder of the Pegaesean Corp. As depicted in the book, Aldebaan's career suggests that of a real-life Bay Street baron, whose younger brother has won both the Booker, and the Giller, Prize. It is one of many dry-martini-with-a-twist delights to be found in this book.'

'One of the keys to the success of this narrative is its reality, its vibrancy of setting and character portrayal, and, in particular, the consistently deft handling of the dialogue which does so much to draw the reader into the motives and emotions of the characters.'