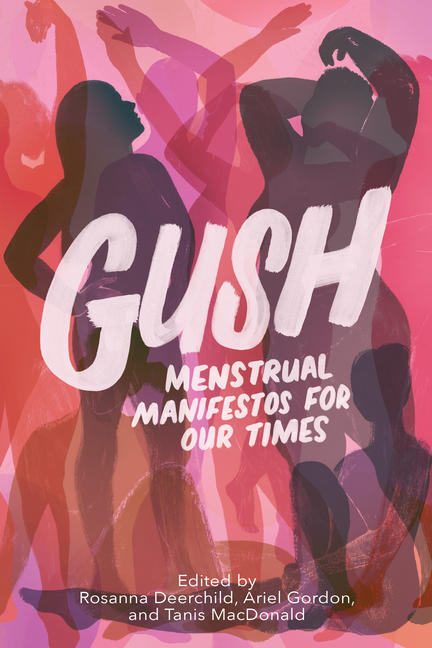 In GUSH, more than 100 women and nonbinary writers from Canada and around the world take apart the bloody instruction of menstruation: its cultures, its lessons, its equipment, and its lexicon. Co-edited by Ariel Gordon, Tanis MacDonald, and Rosanna Deerchild, GUSH offers menstrual manifestos for our time that question the cultural value and social language of monthly blood loss, with rage, humour, ferocity, and grief, and propose that the ‘menstrual moment’ is as individualized, subjective, personal, political, and vital as the ‘feminist click’. With work from emerging and established writers in poetry, cartoons, flash fiction, personal essays, lyric confessions, and experimental forms, this anthology features the voices of Indigenous writers, writers of colour, writers with disabilities, rural writers and urban writers, representing four generations of menstruators: writers who call down their bloodiest muses. Including work by Yvette Nolan, Mini Aodla Freeman, Sheri-D Wilson, Sonnet L'Abbe, Pamela Mordecai, Susan Holbrook, and many more.

ROSANNA DEERCHILD is an award-winning Cree author and broadcaster. She has worked for a variety of Indigenous newspapers and major networks for over 15 years, including APTN, CBC Radio, and Global. Rosanna's debut poetry collection, "this is a small northern town" won the 2009 Aqua Books Lansdowne Prize for Poetry/Prix Lansdowne de poésie. She is a co-founder and a member of the Indigenous Writers Collective of Manitoba. She currently lives in Winnipeg and works as the host of Unreserved on CBC Radio One. SOLOMON RATT was born on the Churchill River just a few kilometres north of Stanley Mission. He spoke only Cree until the age of six when he was taken away from his parents to attend a residential school in Prince Albert. He returned home from residential school every summer where he spoke Cree at all times because his parents spoke only Cree. Since 1986 he has been an associate professor of Cree language studies at the First Nations University of Canada in Regina, Saskatchewan. He is the author of "n?hithaw “cimowina / Woods Cree Stories" published by the University of Regina Press in 2014.

Ariel Gordon is a Winnipeg-based author of two collections of urban-nature poetry, both of which won the Lansdowne Prize for Poetry. Gordon also co-edited the anthology GUSH: menstrual manifestos for our times (Frontenac House, 2018) and is the ringleader of the National Poetry Month in the Winnipeg Free Press project. Her most recent book is Treed: Walking in Canada's Urban Forests (Wolsak & Wynn, 2019).

Tanis MacDonald is the author of two books of poetry: Fortune (2003) and Holding Ground (2000), and is the winner of the 2003 Bliss Carman Poetry Prize. She has published articles on the poetry of P.K. Page, Lorna Crozier, and Anne Carson. She teaches English at Wilfrid Laurier University in Waterloo, Ontario.

Di Brandt’s poetry titles include questions I asked my mother (1987), Agnes in the sky (1990), Jerusalem, beloved (1995), and most recently, Now You Care (2004). She has received numerous awards for her poetry, including the CAA National Poetry Prize, the McNally Robinson Book of the Year Award, and the Gerald Lampert Award. Di Brandt recently returned to the Manitoba prairies, her home, after a decade away, to take up a Canada Research Chair in Creative Writing at Brandon University.

Other titles by Rosanna Deerchild

calling down the sky

this is a small northern town

Other titles by Ariel Gordon

Other titles by Tanis MacDonald

Adventures in Walking While Female

Daring to be an Artist Outside the Big City

questions I asked my mother

From Text to Txting

New Media in the Classroom

The Poetry of Di Brandt