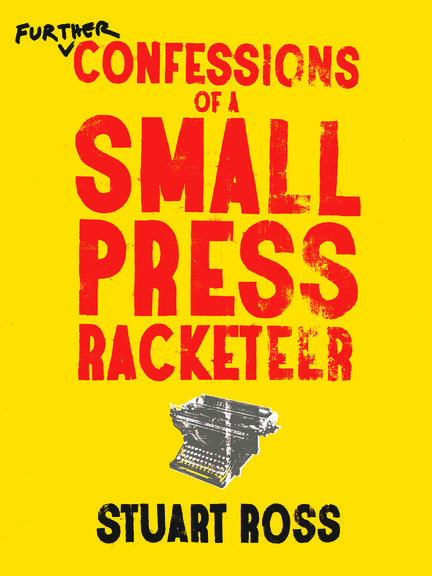 Further Confessions of a Small Press Racketeer takes up where Stuart Ross’s Confessions of a Small Press Racketeer left off in 2005. Memoir, tirade, unsolicited advice — this new volume is drawn largely from Stuart’s notorious “Hunkamooga” column that ran in subTerrain, but also includes pieces from his blog as well as previously unpublished work.

Here they are together in their offbeat brilliance: snarky, provocative, funny, outlandish, and self-deprecating, these “confessions” are urgent dispatches that disrupt the too often polite conversation concerning Canadian literary matters. In these pages, Ross says what so many others only think.

Praise for Confessions of a Small Press Racketeer:

“… a wonderful book—funny, outrageous, and acute. I’ll even say it’s the best short-essay collection about the writing life that I’ve read in ages. … Every aspiring writer should read Confessions of a Small Press Racketeer, just to find inspiration. And so should every established writer—just to keep humble.” (Lynne Van Luven, Malahat Review)

“Of greatest interest … are the postscripts that follow many of Ross' essays. Of particular note are those endnotes which deal with the results of his publishing certain columns—such as losing his publisher, or losing friends from the writing community. This fallout, however, may have been expected as Ross is frequently acerbic and trenchant in his criticism, but no less witty or correct for being so.” (Stephen Cain, Canadian Literature)

The Book of Grief and Hamburgers