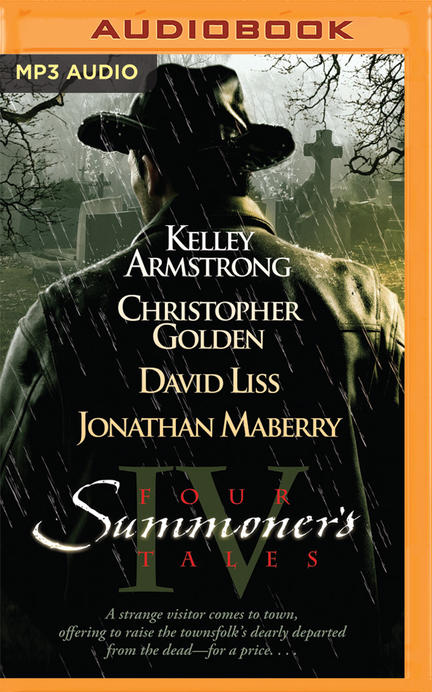 What if the dead could be summoned from their graves—for a price? What if a quartet of distinctive storytellers took a stab at this deceptively simple idea—on a dare? The answers lie here, in Four Summoner’s Tales, as these acclaimed writers accept the challenge and rise to the occasion—in four brilliantly chilling ways. It’s all in the execution….

"Suffer the Children" by Kelley Armstrong
#1 New York Times bestselling author
A preacher and his adopted daughter must solve the mystery of the newcomers to their isolated 19th-century village—men who are preying on residents’ overwhelming grief with promises to bring the stricken back to life.

"Pipers" by Christopher Golden
New York Times bestselling author
Twenty-three people have already lost their lives to the ruthless cartel terrorizing their small Texas border town. But one man has a plan for revenge, if the town’s survivors will let him use their loved ones—to raise an army of the undead.

"A Bad Season for Necromancy" by David Liss
Nationally bestselling author
In merry old England, a rascally con man stumbles upon a book for raising the dead. But instead of using it to make money reviving relatives for the rich, he’ll do just the opposite. Because some family skeletons need to stay buried.

"Alive Day" by Jonathan Maberry
New York Times bestselling author
In war-torn Afghanistan, a U.S. military operative and his team face off against an ancient horror during a harrowing off-the-books search-and-rescue mission.

Christopher Golden is the New York Times bestselling author of novels for adults and younger readers. His original novels have been published in more than fourteen languages in countries around the world.

David Liss is the author seven novels, most recently The Twelfth Enchantment. He has six previous bestselling novels, which have been translated into more than two dozen languages.

Jonathan Maberry is a New York Times bestselling author, five-time Bram Stoker Award winner, and comic book writer. He writes in multiple genres including suspense, thriller, horror, science fiction, fantasy, and adventure; and he writes for adults, teens, and middle grade. His works include the Joe Ledger thrillers, Glimpse, the Rot & Ruin series, the Dead of Night series, The Wolfman, The X-Files Origins: Devil’s Advocate, Mars One, and many others. Several of his works are in development for film and TV, including V Wars, which will be a Netflix original series. He is the editor of high-profile anthologies including the X-Files books, Aliens: Bug Hunt, Out of Tune, Hardboiled Horror, Baker Street Irregulars, Nights of the Living Dead, and others. He lives in Del Mar, California. Visit him at JonathanMaberry.com and on Twitter (@JonathanMaberry) and Facebook.

Other titles by Christopher Golden

Tell My Sorrows To The Stones

Other titles by David Liss

Other titles by Jonathan Maberry

Excerpts from six of our stellar 2015 hero-themed middle-grade titles!