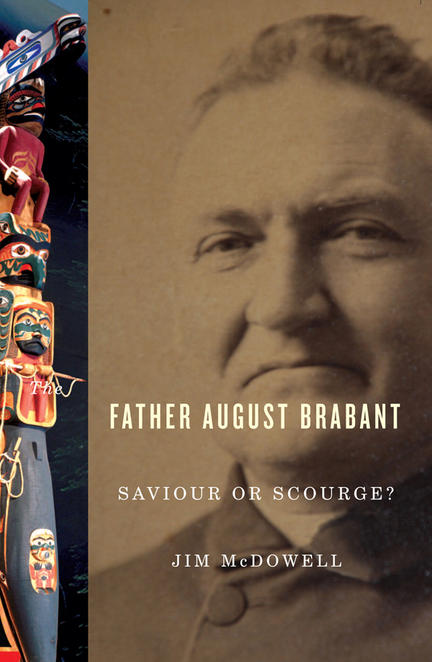 Father August Brabant (1845–1912) was the first Roman Catholic missionary to live and work among indigenous peoples on the west coast of Vancouver Island during the colonial period. He endured long periods of isolation, built a number of log churches and undertook extraordinarily difficult trips along the west coast in dugout canoes. His thirty-three-year-long effort to transform Nuu-chah-nulth culture gives us a provocative case study of the dynamics that shaped, and continue to define, the settler-colonial relationship between indigenous peoples and the state in Canada. Convinced he had a mission to save the indigenous people from being themselves, the zealous priest strove to instill alien spiritual beliefs. He served as a willing instrument for imposing colonial power by introducing new forms of justice, commerce, dress, housing, personal identity, and—most devastating of all—schooling. As the father of British Columbia’s first residential school, Brabant precipitated the single institution that proved most destructive to the people he set out to rescue. Brabant’s biography will be of interest to historians, anthropologists, political scientists, individuals engaged in First Nations Studies, and general readers.

Jim McDowell is a veteran British Columbia historian. His first career was teaching, which took him into classrooms from northern California to Seattle, New York City, and Vancouver. He taught elementary school in California and Washington, worked as an inner-city education consultant in Harlem and Brooklyn, and educated teachers at Simon Fraser University. McDowell also worked for 20 years as a freelance writer and independent reporter; he wrote hundreds of newspaper and magazine articles for Canadian and U.S. publications. McDowell has three published books: Peace Conspiracy: The Story of Warrior-Businessman Yoshiro Fujimura (McBo, Irvine, CA 1993), a partial biography of a once obscure Japanese naval commander; Hamatsa: The Enigma of Cannibalism on the Pacific Northwest Coast (Ronsdale, Vancouver, BC 1997), an investigation of the existence of cannibalism among early Northwest Coast Native people; Josè Maria Narvaez: The Forgotten Explore (Arthur H. Clark, Spokane, WA 1998), the first full life story of the Spanish-Mexican navigator. This year, McDowell is looking forward to the publication of Father Augustin Brabant: Saviour or Scourge? by Ronsdale. It will present a thorough, unvarnished biography of the first Catholic missionary to work on Vancouver Island during the colonial period. McDowell is also working on two other books: one about birdsong, which uses folktales from around the world to probe the possible psychological significance of bird songs for human beings; another about walks for seniors and families.

“Although [McDowell’s] writing style was clearly based on his extensive, thorough research, for me, it read like a historical novel. The way he ended each chapter left me anticipating moving on to the next, often delaying some chore in order to get into the next chapter.” —Sandra Klonsky

“McDowell’s look at Brabant is superb, combining information on the priest’s life with the appropriate context — the social history of the indigenous people he was trying to save from themselves. . . . This is not merely the story of one priest, but about the clash between two dramatically different viewpoints.” —Times Colonist

Father Against Brabant: Saviour or Scourge?

In 1869, the west coast of Vancouver Island was isolated and untouched by Euroamerican influence. First Nations’ cultures were highly structured and complex and had flourished for thousands of years. Father Brabant, who had no understanding of the region or its people, arrived as a zealous missionary determined to convert Aboriginals to Catholicism, forcing them to abandon their heritage. He was responsible for the first residential schools on Vancouver Island which were later criticized for “trying to kill the Indian in the child,” making it easier for the government to take away land and resources. Chief Tawinisam, the hereditary leader of the Hesquiahts, wished to maintain and protect traditional values and so became Brabant’s main opponent. This thoroughly researched historical document brings to life the conflict between the two cultures.