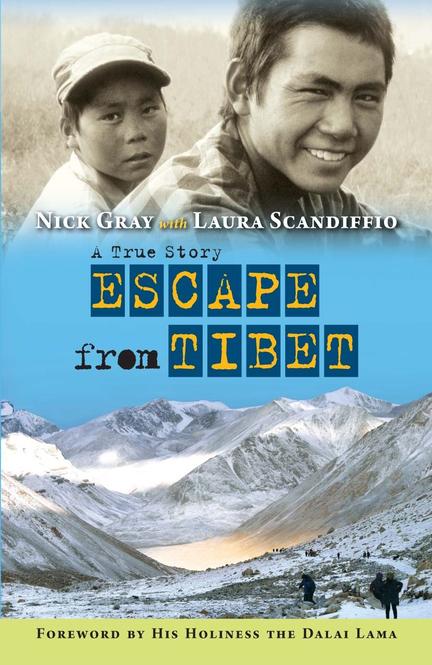 Two brothers face cruelty, hardship, and hope, on the ultimate journey in search of freedom.

Eleven-year-old Tenzin hasn’t seen his older brother, Pasang, in five years, so he is thrilled when Pasang unexpectedly returns to their Tibetan village late one night. Now eighteen, Pasang is an educated monk whose return from India provokes the suspicious and ever- watchful eyes of the Chinese authorities. Unbeknownst to Tenzin, Pasang has conspired with their mother to leave again—taking his younger brother with him, this time, in search of a better life. At first Tenzin is thrilled to embark on such an adventure with Pasang. But crushing homesickness soon sets in as the brothers eke out a meager existence begging in the unfamiliar streets of Lhasa, often narrowly dodging the police. They finally scrape together enough money to begin the most harrowing part of their journey: the physically excruciating, dangerous, and illegal trek to a new country on the other side of the Himalayan mountains, where they can be granted refugee status and begin to rebuild their lives. Along the way they suffer abuse at the hands of border police, meet fellow Tibetans from whom they draw strength, and have a chance encounter with a film crew that will change their lives.

Based on the true story of the brothers’ journey in the mid-1990s first made into an acclaimed documentary by Nick Gray, Escape from Tibet is a riveting tale of courage, adventure, and triumph. The outpouring of support for the boys that resulted after the documentary aired in the U.K. led to the brothers moving to Britain, where they live today. Only now do they feel that the full story of their daring escape can be told.

A foreword by His Holiness the Dalai Lama and an introduction provide historical context. Black and white photographs of Nick Gray’s travels through Tibet vividly evoke the boys’ homeland, and a timeline, glossary, and maps further contextualize the Tibetans’ controversial and ongoing struggle with China.

Nick Gray is a documentary-maker whose films have won many international awards. He now writes and teaches at the University of Lincoln in England where he is Visiting Professor. Escape From Tibet is his first book.

“The graphic depiction of their experiences is so riveting that it reads like fiction . . . A valuable and fascinating resource.”

“The brothers’ triumph makes for a heartwarming tale.”

“An engaging read with a happy ending is a safe way to introduce young readers to the plight of Tibetans in exile, and a good lead-in to other materials on the area and its people.”

“A good way to broaden the perspectives of readers whose knowledge of modern Tibet is drawn solely from assignment titles or biographies of the Dalai Lama.”

“The photos are the most moving, reminding readers of the real people behind the story.”

People Who Said No