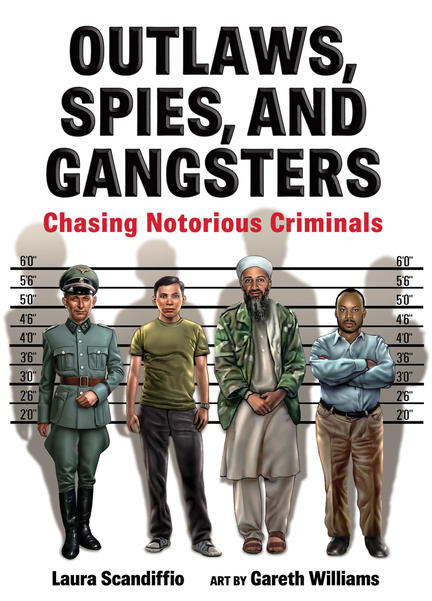 Experience all the thrills and suspense of chasing down the world’s highest-profile criminals.

What does it take to catch a criminal? Not just any criminal, but one of the world’s most wanted? In Outlaws, Spies, and Gangsters, Laura Scandiffo chronicles eight of history’s most famous manhunts, from searches for drug dealers to dictators, hackers to henchmen. Discover the danger and intrigue behind these riveting stories of daring and perseverance. Read about the great lengths authorities went to, to catch:

An introduction and afterword help frame these remarkable stories, which also address how manhunts have changed over time. Gareth Williams’ bright, dramatic art makes each exciting tale jump off the page.

“An appealing way to bring reluctant readers to history.”

“An excellent tool to start a discussion about the nature of crime.”

“Scandiffio has authored fast-paced narratives that will appeal to the male readership.”

“Engagingly written . . . would be a welcome addition, especially . . . where high-interest, collective biographies are in demand.”

“An engaging narrative nonfiction voice . . . Scandiffio threads the tales with thoughtful reflection on the changing modes of hunting down criminals.”

“Middle school students interested in crime and criminals will be fascinated by this easy-to-pick-up book.”

“It was nice to see that there were plenty of things here that I didn't know yet.”

People Who Said No

The Adventures of Medical Man