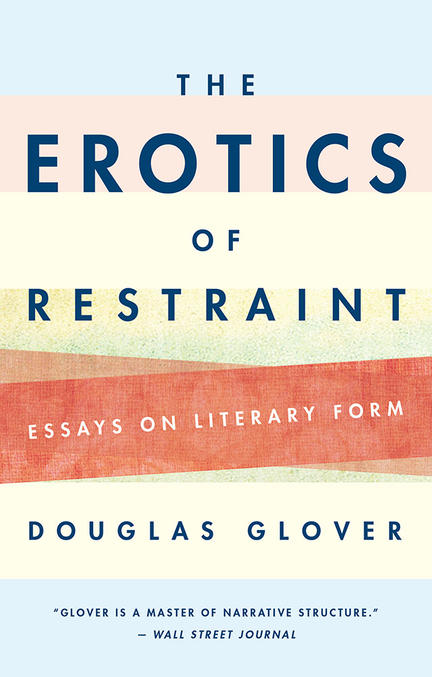 Why do we read? What do we cherish in a book? What is the nature of a masterpiece? What do Alice Munro, Albert Camus, and the great Polish experimentalist Witold Gombrowicz have in common? In the tradition of Nabokov, Calvino, and Kundera, Douglas Glover’s new essay collection fuses his long experience as an author with his love of philosophy and his passion for form. Call it a new kind of criticism or an operator’s manual for readers and writers, The Erotics of Restraint extends Glover’s long and deeply personal conversation with great books and their authors. With the same dazzling mix of emotion and idea that characterizes his fiction, he dissects narrative and shows us how and why it works, why we love it, and how that makes us human. Erudite and obsessively detailed, inventive, confessional, and cheeky, these essays offer a brilliant clarity, a respite in an age of doubt. They raise the bar.

Excerpt: Erotics of Restraint, The: Essays on Literary Form (by (author) Douglas Glover)

Anatomy of the Short Story

Story form is an object, a translucent, shimmering thing with words tacked to the surface of its swirling involutions. The words glitter with their own reflective colouration; in them you see the momentary reflections of other words. Wires as thin as gossamer connect the words with more words on distant parts of the structure where they set up new colonies with flags, banners, replicas and maps of the whole. Spin the form and the same words appear in flashes, the eye registers their rhythmic insistence. It is wonderful and miraculous to watch. And yet with all its surface complexity, it is a structure I recognize, a story. That’s the experience of reading for me.

But a story is not an infinite system. On the page, a story is still 5,000 or so words, laid one after the other, a serpentine path in a forest of white space. Its three-dimensionality – characters coming to life and strutting upon the world stage – is an illusion, fostered by technical means. This engenders a paradox: you read a story forward but understand it backward, only fully comprehending the journey when you have reached the end and rehearse it in memory. Even then it is difficult to capture a story in its entirety, as a simultaneous entity, without dedicated re-reading. And over successive re-readings the simple story action recedes in significance as gradually the beautiful machinery of story form comes into focus. There lies a reader’s deepest pleasure.

When I teach fiction writing, I use a sequence of three short stories to demonstrate formal principles: “The Point” by Charles D’Ambrosio, Jr., “Shiloh” by Bobbie Ann Mason, and “Brokeback Mountain” by E. Annie Proulx. All three were originally published in The New Yorker. All are fine short stories. But there are many fine short stories. These three work particularly well together as a teaching sequence because they use the same structures and devices but with readily apparent variations based on story concept and the author’s taste and personality.

Students often have a difficult time picking out structure in a text because of the sheer number and complexity of the devices involved and because authors vary the devices in wildly individual ways. But analyzing these three stories in sequence reduces the difficulty of isolating form and variation. Taken together, the stories amount to a short course in composition (not to mention, how to be better readers). They teach students the four basic story structures: plot, image patterning, thematic passages and backfill, as well as elements of time control, scene writing, subplot, and that mysterious thing called shape. They offer crucial insight into how to achieve the density of internal reference, rhyme (yes, rhyme) and self-conscious intentionality necessary to make a work of art out of words. The two universal tools in this networked system are what I call homologies (parallel—rhyming—actions) and memes (repeated texts and tags).

The most obvious variations in the story sequence are the amount of time covered in the narrative, the number of characters and point of view. “The Point” covers about two hours, and there are two characters in action. “Shiloh” takes place over the course of a few weeks; there are three important characters and one walk-on. “Brokeback Mountain” follows its two protagonists over twenty years and includes several other characters with significant roles, even point-of-view turns. “The Point” is a first person story, “Shiloh” third person single-character narration and “Brokeback Mountain” third person multiple-character narration with an emphasis on one main character. In other words, the reading sequence moves from simplest case to increasingly complex scenarios.

At the very least my students get to see how authors handle different time control problems. How do you fit two hours or twenty years into the same amount of text? They also learn something about adding supernumerary characters, how to control them and what use can be made of them. And they read good examples of the three most common point of view structures in contemporary fiction. “The Point” and “Shiloh” are conventional in this regard; “Brokeback Mountain,” in its use of an elastic third person is less so and thus somewhat mystifying in the way it seems to play fast and loose with the principle of point of view consistency.

All three stories vary in terms of shape (as I say, that mysterious thing). “The Point” looks quite straightforward at first. It begins at the beginning and proceeds chronologically (with nuggets of background inserted here and there) to the end of the plot. But then it carries on to deliver a major scene from a year earlier. The major backfill is back-loaded, added at the end, a highly inventive variation of conventional practice. “Shiloh” is the most conventional (by which I mean a commonly used structure): the story starts, then after a few paragraphs of setup, it steps back and delivers a snippet of crucial backfill. A couple of pages later, Mason inserts a paragraph-long expansion of this backfill. And then the story proceeds chronologically to its close. In “Brokeback Mountain,” Proulx uses a highly symbolic bookend structure to vary what is essentially a conventional forward-moving narrative. By book-ending, I mean that the story text begins and ends at the same place. It begins with a present tense, italicized section of text that represents a notional now, then drops back in time to deliver the story setup after which the narrative proceeds more or less chronologically. At the story’s close, we return to the image introduced at the beginning.

Praise for The Erotics of Restraint: Essays on Literary Form

“His deep analysis of great works of fiction is more like the study of, say, quantum physics...comprehending the underpinnings of our existence in relation to the evolution of storytelling creates perspective that leads to mindfulness, an understanding of what resonates in the human psyche—what words, what phrases, what desires...it empowers [writers] to create works of deeper, more effective meaning, works that engage on both conscious and subconscious levels.”— Orca

“The collection is a fascinating journey through literature, philosophy, form, and the connection we all feel when we encounter incredible writing.”— Fiction Writer's Review

“Glover is a master of narrative structure.” — Wall Street Journal

“So sharp, so evocative, that the reader sees well beyond the tissue of words into … the author’s poetic grace.” — The New Yorker

“Glover invents his own assembly of critical approaches and theories that is eclectic, personal, scholarly, and smart … a direction for future literary criticism to take.” — The Denver Quarterly

“Few experiences in life are as great as reading towering writers like Jane Austen and Alice Munro. As a critic, Douglas Glover does something astonishing: he makes that experience even better. By reading Glover you become a better reader, more alive to the nuance, music, and sheer richness of the best writing. He's a critic who elevates reading itself into an art form.”— Jeet Heer

“Impressive, enjoyable, and highly instructive … This is not literary craft reduced to statistical formulae and write-by-the-numbers word-bytes. Glover’s admirable ability and patient willingness to cast a careful—not cold—eye on what makes sentences hum and flow is fueled by a vital, infectious fascination with words, enabling him to reveal the inspired, alchemical, verbal concatenation at work in the most alluring and memorable fiction writing.” — Review of Contemporary Fiction

“For the budding writer, Attack of the Copula Spiders offers an excellent primer on the basics; the practiced writer will glean so much more from Glover’s wonderful literary experience.” — The Los Angeles Review of Books

“Douglas Glover, the award-winning Canadian writer of fiction, short stories and essays carries within him a huge sense of duty both to the craft of writing and to the language … I stand before it in awe … This is a book for all writers and for any creative writing class syllabus.” — Telegraph-Journal

South Will Rise at Noon