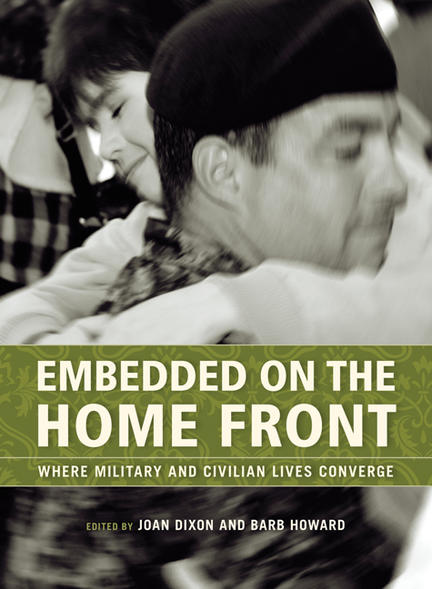 Home front. It’s hard to separate that word from war. In the First and Second World Wars, the home front was a clear entity and location: if you weren’t on the frontlines, you were on the home front. But during current times of peacekeeping, peacemaking and armed interventions, the notion of home front seems to comprise only those who are in some way directly affected by the military: family and friends of soldiers, returning soldiers or ex-soldiers—an invisible group camouflaged by everyday jobs and activities.

Editors Barb Howard and Joan Dixon have compiled insightful essays and reflections from 14 writers, including Melanie Murray, Scott Waters, Ryan Flavelle and Chris Turner. All have found themselves, at one time or another, embedded on the home front. And even though each experience is unique and comes from a single perspective, common motifs surface: family, fate, death and memory. This anthology captures triumphs, incredible fortitude and humour, often in the face of grief, as well as the complicated logic, fears, anger and other everyday realities that are part of home-front life.

Stories of Canada and amazing Canadians have always inspired JOAN DIXON's research and she likes to share ones that are different from those in the regular history books. She is the author of Trailblazing Sports Heroes, Roberta Bondar, Extreme Canadian Weather, as well as of books about Canadian icons such as the Avro Arrow and the Calgary Stampede. She is currently based in the foothills of the Rockies. Check out dixanprojects.ca for more information.

Other titles by Joan Dixon

Celebrating the Calgary Exhibition and Stampede

The Story of the Greatest Outdoor Show on Earth