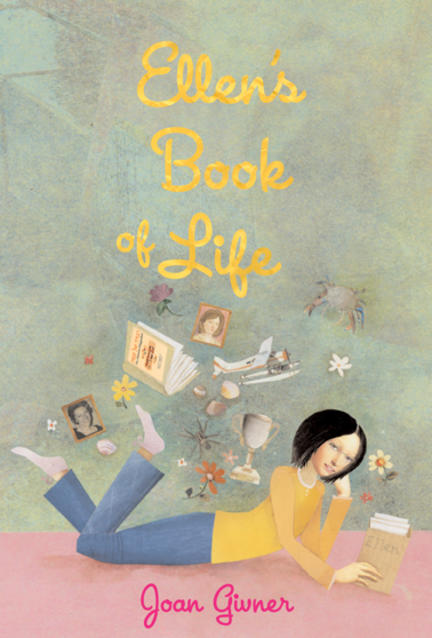 When Ellen's beloved mother suddenly dies she finds a letter that her mother has left her, which piques her natural curiosity and sets her on a new mission. Ellen knew that she was adopted, but now she has the tools she needs to find her birth mother. And she does, though the results are surprising. With her typical energy and openheartedness she embraces not only her newfound family but a new faith, both of which unexpectedly help her, and her family, to move on with their lives.

...this first person narrative deals with weightier matters than those in the earlier books...it is bolstered by the clarity and emotional candor of the writing.

Givner does an amazing job of portraying a grieving family in this novel...each character resonates with true feeling...The book is also rich with story...characters and story details that are honest and appealing, Ellen's Book of Life is a book that is a much recommended read.

The several threads of the story weave together without fanfare but with a calm assurance that creates a sturdy sense of character and believability.

Ellen’s Book of Life is the fourth in Joan Givner’s delightful Ellen Fremedon series. In previous books, the observant and sometimes irritable Ellen has begun a novel, discovered that she is adopted, started a newspaper and been a volunteer (this last job to occupy a dull summer). As the novel opens, she is still living in Partridge Cove on Vancouver Island with her younger and, to her, obnoxious twin brothers, and her parents. Twelve-year-old Ellen has lots of home chores because her mother has MS and, throughout the books, has become more and more incapacitated.

What promises to be an almost normal summer turns to tragedy when Ellen’s mother dies while Ellen is on her first trip to Toronto. In the aftermath – as Ellen and her family are weighed down by grief – she finds a letter from her mother with information about her adoption and the hope that she may someday meet her birth mother. Ellen’s curiosity is piqued and she starts the process of finding her roots – a process which leads to an abrasive lawyer, a surprising new family and the discovery of her Jewish heritage. Over the course of the year, Ellen experiences and learns about grief, growth, change – and life.

Telling her story in the first person, Givner has a masterful command of Ellen’s voice. It is all too easy when creating a child’s first person story to let a few overly adult observations or perceptions slip in. Givner never does that. Throughout the series, the writing is fresh and absolutely true to the character. Ellen records her actions and those of the children and adults around her simply and directly – letting them tell both the story and her feelings. Whether Ellen is sitting alone on her rock after her mother dies, watching the grown-ups’ politeness as her new grandmother meet her Gran or getting exasperated with her brothers’ obsession with tarantulas, her story is one that will leave readers wanting another book in the series.