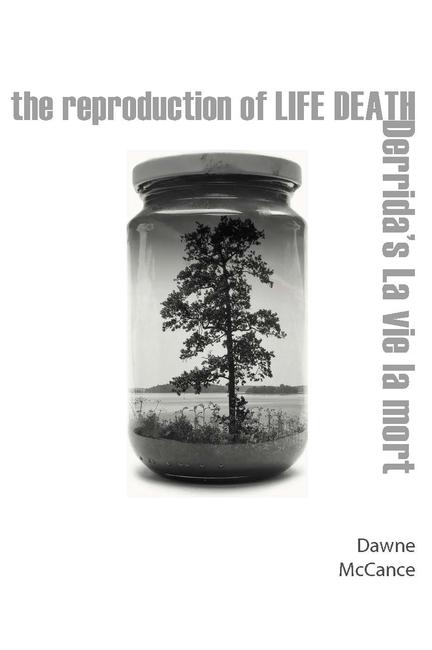 During the 1975–76 academic year, Jacques Derrida delivered a seminar, La vie la mort (Life Death), at the École normale supérieure, in Paris. Based on archival translations of this untapped but soon-to-be-published seminar, The Reproduction of Life Death offers an unprecedented study of Derrida’s engagement with molecular biology and genetics, particularly the work of the biologist François Jacob.
Structured as an itinerary of “three rings,” each departing from and coming back to Nietzsche, Derrida’s seminar ties Jacob’s logocentric account of reproduction to the reproductive program of teaching that characterizes the academic institution, challenging this mode of teaching as auto-reproduction along with the concept of “academic freedom” on which it is based. McCance also brings Derrida’s critique of Jacob’s theory of auto-reproduction together with his reading of reproductivity, the tendency to repeat-reproduce, that is theorized and enacted in Freud’s Beyond the Pleasure Principle. The book further shows how Derrida’s account of life death relates to his writings on autobiography and the signature and to such later concerns as the question of the animal.
McCance brings extensive archival research together with a deep knowledge of Derrida’s work a background in genetics to offer a fascinating new account of an encounter between philosophy and the hard sciences that will be of interest to theorists in a wide range of disciplines concerned with the question of life.

Dawne McCance is Distinguished Professor at the University of Manitoba. Her books include Critical Animal Studies: An Introduction and Derrida On Religion.

This excellent book allows the reader not only to understand Derrida’s La Vie la mort, but to see how it ties together and grounds a number of his other readings, including some of the most important ones, on death, animals, pedagogy, and science and community.---Allan Stoekl, Pennsylvania State University,

This is a superbly researched, written, and argued book on two of the most important though neglected aspects of Derrida’s work: his reading of biology and his closely related work on academic institutions. It is a work that anyone who is serious about Derrida will want to read and will have to take into account.---Michael Naas, DePaul University,

A renowned Derrida scholar, McCance offers a detailed and wide-ranging analysis of Derrida's La vie la mort, a seminar in which Derrida provided an extensive presentation of his understanding and treatment of the interplay between the life sciences and philosophy.

Other titles by Dawne McCance