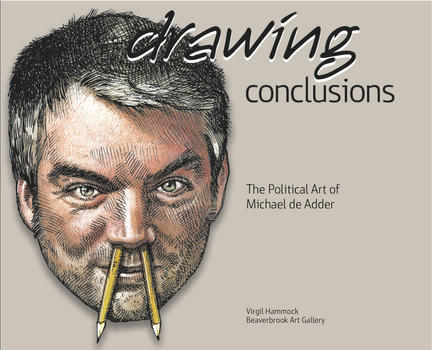 McKenna to Harper, Chrétien to Bush, with a dash of Trudeau and Mulroney.

Michael de Adder is one of Canada's foremost cartoonists, part of a long history of political cartooning that began in ancient Egypt and Rome. The invention of the printing press and the wide distribution of newspapers gave life to the political or editorial cartoonist.

Controversy goes hand-in-hand with being an editorial cartoonist and de Adder has had his share of stirring up the pot. His 2007 cartoon of Jerry Falwell arriving in Hell with the devil exclaiming "Surprise!" is one example. His famous cartoon on the election of Pope Benedict XVI remained unpublished because the Catholic editor of the Halifax Daily News deemed it too controversial. (It later won the Association of American Editorial Cartoonists Golden Spike Award for the best cartoon killed by an editor.) In this lively collection of political cartoons drawn from work made between 1997 and 2015, de Adder skewers politicians and public figures of all persuasions.

Michael de Adder began his career as a cartoonist with the Halifax Daily News. He has since worked for Brunswick News, the Halifax Chronicle Herald, the Toronto Star, and the Hill Times. His work is syndicated throughout North America.

Virgil Hammock is professor emeritus of fine arts at Mount Allison University in Sackville, New Brunswick. He has written extensively on Canadian and international art for the last four decades and has served as past president of the Canadian Section of the International Association of Art Critics.

Michael de Adder was born in Moncton, New Brunswick. He studied art at Mount Allison University, where he received a Bachelor of Fine Arts in drawing and painting. After freelancing for a few years, he landed his first full-time cartooning job at the Halifax Daily News. After the Daily News folded in 2008, de Adder became the full-time cartooonist at New Brunswick News. He now freelances for the Halifax Chronicle Herald, the Toronto Star, and the Ottawa Hill Times. His work is syndicated throughout North America by Artizans.com. de Adder reaches millions of readers per week, making him one of the most read cartoonists in Canada.

Other titles by Virgil Hammock

Other titles by Michael De Adder