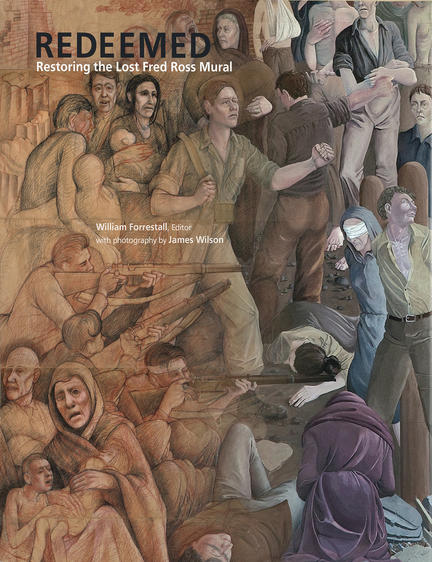 When it was first unveiled on Empire Day in 1948, Fred Ross's mural The Destruction of War & Rebuilding the World through Education held a special place in the civic consciousness of New Brunswick citizens. Originally commissioned as a memorial to the 63 Fredericton High School students whose lives were lost in the Second World War, the mural was later dismantled, placed in storage, and eventually disappeared.

In the 1990s, a chance discovery of the full-scale mural drawings, now housed at the National Gallery of Canada, provided what would eventually become a treasure map-like route to the mural's restoration. With what grew to be nationwide support, three studio assistants, who were guided by Fred Ross and the drawings that he had created more than 60 years earlier, retraced the developmental process of the mural in what would prove to be the most ambitious reanimation of a cultural treasure in Canadian art history. This is the unprecedented story of the mural's history — its creation, loss, and eventual restoration and return to public prominence.

William Forrestall, editor of Redeemed: Restoring the Lost Fred Ross Mural, is a practising artist with over one hundred solo and group exhibitions across Canada and internationally.

His first solo exhibition was held at the Ring Gallery of Art in Saint John, New Brunswick, in 1986. With the support of Fred and Sheila Ross, his most recent was held at Kinsman Robinson Galleries in Toronto, Ontario.

His work has been featured in two book-length monographs, WILLIAMforrestall: PAINTINGSdrawings, published by the New Brunswick Museum in conjunction with his retrospective exhibition in 2010, and Objects for Study, based on a series of drawings he did at the Ashmolean Museum at Oxford University.

Virgil Hammock is professor emeritus of fine arts at Mount Allison University in Sackville, New Brunswick. He has written extensively on Canadian and international art for the last four decades and has served as past president of the Canadian Section of the International Association of Art Critics.

Architect and art historian John Leroux takes a holistic view of his profession, seeing beyond buildings themselves into the cultural, intellectual and physical landscapes to which they contribute. Born in Fredericton, Leroux graduated from the McGill School of Architecture in 1994 and completed a Masters degree in Canadian Art History at Concordia University in 2002. He has worked at several award-winning architecture firms in Toronto, Atlanta and Fredericton, and also teaches at the New Brunswick College of Craft and Design and St. Thomas University. He has won many awards for architectural and public art projects throughout Canada, and has pursued various creative disciplines such as set design for Theatre New Brunswick. A contributing architecture columnist for the Telegraph-Journal and Canadian Architect magazine, he is also the author of three books on New Brunswick architecture: A Fredericton Alphabet, Building Capital: A Guide to Fredericton’s Historic Landmarks, and Building New Brunswick: an architectural history.

Other titles by Virgil Hammock

Other titles by John Leroux

A Vision in Wood and Stone

The Architecture of Mount Allison University