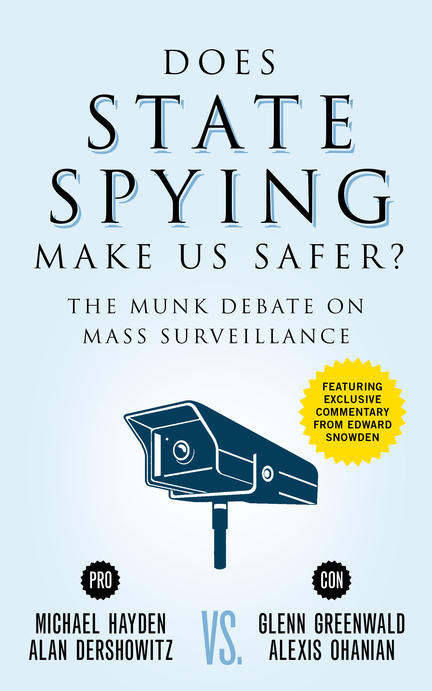 Does government surveillance make us safer? The thirteenth Munk Debate, held in Toronto on Friday, May 2, 2014, pitted Michael Hayden and Alan Dershowitz against Glenn Greenwald and Alexis Ohanian to debate whether state surveillance is a legitimate defence of our freedom — the democratic issue of the moment.

In a risk-filled world, democracies are increasingly turning to large-scale state surveillance, at home and abroad, to fight complex and unconventional threats — but is it justified? For some, the threats more than justify the current surveillance system, and the laws and institutions of democracies are more than capable of balancing the needs of individual privacy with collective security. But for others, we are in peril of sacrificing to a vast and unaccountable state surveillance apparatus the civil liberties that guarantee citizens’ basic freedoms and our democratic way of life.

In this edition of the Munk Debates, former head of the CIA and NSA Michael Hayden and civil liberties lawyer Alan Dershowitz square off against journalist Glenn Greenwald and reddit co-founder Alexis Ohanian to debate the legitimacy of state surveillance. With issues of Internet privacy increasingly gaining prominence, the Munk Debate on the Surveillance State asks: Should government be able to monitor our activities in order to keep us safe?

MICHAEL HAYDEN is a retired four-star general who served as director of the CIA, director of the National Security Agency (NSA), and chief of the Central Service (CSS). General Hayden has also served as the principal deputy director of national intelligence, the highest-ranking military intelligence officer in America. He is currently a principal at the Chertoff Group, a security consultancy co-founded by Homeland Security Secretary Michael Chertoff, and a distinguished visiting professor at the George Mason University School of Public Policy.

ALAN DERSHOWITZ is considered one of America’s preeminent civil liberties lawyers. Until his retirement in December 2013, Dershowitz was the Felix Frankfurter Professor of Law at Harvard Law School. He has published over one thousand articles in magazines, newspapers, journals, and blogs, including the New York Times Magazine, the Washington Post, and the Wall Street Journal, and is the author of thirty fiction and non-fiction books, including Chutzpah — the New York Times #1 bestseller. His books have been translated into many languages and have sold more than a million copies worldwide.

GLENN GREENWALD is a Pulitzer Prize–winning investigative journalist and columnist for First Look Media. Formerly a constitutional and civil lawyer, he is he author of three New York Times bestselling books, including How Would a Patriot Act? and With Liberty and Justice for Some. In June 2013, Greenwald published the first of many stories related to classified NSA surveillance programs from the troves of documents leaked by Edward Snowden. His book on the subject, No Place to Hide: Edward Snowden, the NSA, and the U.S. Surveillance State, was released in April 2014.

ALEXIS OHANIAN is a serial Internet entrepreneur and co-founder of reddit, the social news website used by over 100 million people each month. Named to the Forbes “30 Under 30 in Technology” list two years in a row, he has been lauded as the “Mayor of the Internet” for rallying public opposition to the U.S. Congress’s Stop Online Piracy Act. He is also the author of the national bestseller Without Their Permission: How the 21st Century Will Not Be Managed.

Other titles by Michael Hayden

So Much to Do, So Little Time

The Writings of Hilda Neatby