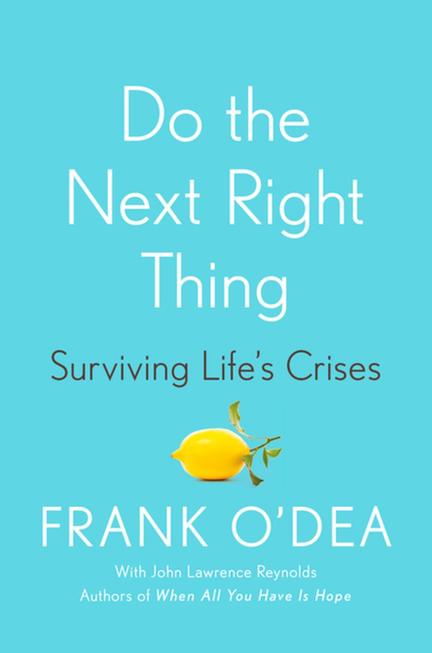 Frank O’Dea is no stranger to overcoming crisis. He was a victim of abuse as a teenager and at twenty-four, a homeless alcoholic. But he was able to turn his life around and become a successful businessman while creating a family. Now he’s sharing the lessons he’s learned, offering guidelines that anyone can follow to help him or her through crises.

Most people believe that a crisis descends suddenly and unexpectedly. In fact, they tend to build right in front of our eyes. But the emotional impact makes taking even the smallest step difficult, when a big leap is often needed. Here are proven techniques for dealing with any crisis, which O’Dea argues is just another term for change. Understanding that a crisis need not affect your happiness, that it is not necessarily a change for the worse, makes us already better equipped to handle it. The crisis is a curve in the road, not a dead end.

In his early teens, Frank O'Dea's life went off the rails into a downward spiral. Within a few years, he was living in 50-cent-a-night flop houses in Toronto's bowery district where just surviving was about all one could do in a day.

At 23 years of age, with the courage to hope for a better life, and the spirit to forge ahead, Frank began the long road back. Fighting all of those obstacles that hold back the homeless, the impoverished and the destitute, he overcame and rejoined society.

Then, if that were not enough, he turned that same determination to the obstacles of life that challenges all of us. Within a few short years became an award winning salesperson, started a small business selling coin sorters, managed a successful federal political campaign and co-founded The Second Cup, which soon became the largest chain of gourmet coffees and teas in the country. In 1985, building on that success, he went on to help in the founding of Proshred Security, a company that pioneered the entire industry of on-site document destruction. This company became an international organization with operations in Canada, Europe and the United States. At the same time, with others, he was instrumental in the founding of Samaritan Air, in 1989, Ontario's first private, single-purpose air ambulance service.

As a successful businessperson, Frank took steps to give back to the community. He began by serving on the boards of directors of charities and not-for-profit organizations. But the entrepreneur's desire to innovate and build was not to be denied. In 1985 he co-founded Street Kids International, an organization developed to help homeless children in third world countries, through education and self-reliance programs. A few years later, he became the founding Chair of War Child (Canada) , an organization that provides assistance against suffering and abuse of children in war affected countries. Continuing on the international scene, and at the request of the Government of Canada, Frank co-founded the Canadian Landmine Foundation, an organization that raises funds for the dismantling of minefields around the world. He went on the initiate that organization's most successful fund raising program, “Night of a Thousand Dinners” , with participation of some 30,000 thousand people from countries around the world.

Frank's achievements are, of course, a work in progress. In 2004, this one-time homeless person from the streets of Toronto was invested as an Officer of the Order of Canada by the Governor General. In 2005, Frank received an honourary degree, Doctor of Laws, from Royal Roads University, and has since been appointed Chair of Royal Roads University Foundation.

Currently, Frank is President of ARXX Building Products Inc. where he has combined his entrepreneurial talents and his strategic thinking to turning that company into a powerhouse in that industry. At the same time he continues to be involved with a number of charities and not-for-profits, such as Invest in Kids. Living in Ottawa with his wife Nancy and their two children, Frank stays close to his varied responsibilities across Canada by commuting to them in his own plane.

A gifted and professional speaker for many years, Frank is sought after by companies and associations when they are looking to deliver an inspirational message about success against the obstacles of life. His message resonates with audiences who have been through the upheaval of major changes or are facing the uncertainties of change or daunting obstacles such as tougher competition, new demands, restructuring and personal challenges. He gets them focussed on dealing with their challenges, and more than that, on prevailing over them.

Other titles by Frank O'Dea

When All You Have Is Hope

One Hell of a Ride