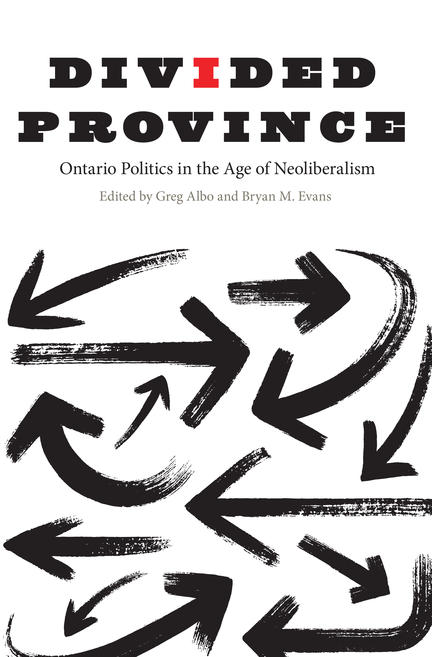 No government jurisdiction in Canada has so radically transformed its public policies over the past decades as Ontario, and yet the province has also maintained a striking degree of political stability in its party system. Since the 1990s, neoliberalism has been the point of reference in constructing policy agendas for all of Ontario's political parties. It has guided the strategy for governance of the dominant Liberal Party since 2003, even as it divides the province between workers and employers, north and south, rural and urban, and racialized minorities and the majority population.

With a focus on the governments of Mike Harris, Dalton McGuinty, and Kathleen Wynne, Divided Province brings together leading researchers to dissect the province's public policies since the 1990s. Presenting original, state-of-the-art research, the book demonstrates that, although the Conservative government of Mike Harris implemented the sharpest and most profound shift towards the establishment of a neoliberal regime in the province, the subsequent Liberal governments consolidated that neoliberal turn. The essays in this volume explore the consequences of this ideological turn across a spectrum of policies, including health, education, poverty, energy, employment, manufacturing, and how it has impacted workers, women, First Nations, and other distinct communities.

The first book to offer a comprehensive critical account of neoliberalism in Ontario, Divided Province overturns conventional readings of the province's politics and suggests that building a more democratic and egalitarian alternative to the current orthodoxy requires nothing less than a radical rupture from existing policies and political alliances. Without such a decisive break, political space may well open up again for the populist right.

Greg Albo is associate professor of political economy in the Department of Political Science at York University and co-editor of the Socialist Register.

Bryan M. Evans is professor in the Department of Politics and Public Administration at Ryerson University and co-editor, with Carlo Fanelli, of The Public Sector in an Age of Austerity: Perspectives from Canada's Provinces and Territories.

Other titles by Greg Albo

Canada and the War in Afghanistan

In and Out of Crisis

Other titles by Bryan M. Evans

The Public Sector in an Age of Austerity

Perspectives from Canada’s Provinces and Territories