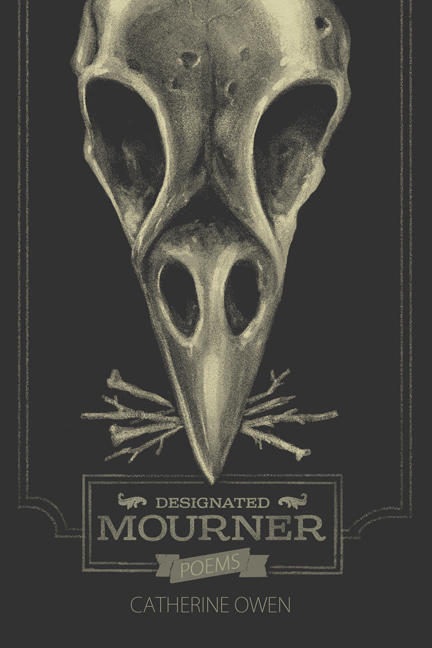 A moving, lyrical, and original collection from an award-winning poet

Designated Mourner is a collection of elegies for an unconventional spouse and artistic collaborator, lost to addiction at a young age. These poems keen on the page, tracing tenderness and sorrow while raging against his night.

Well crafted and intimate, Designated Mourner engages with a range of forms. It is timely as grief is a misunderstood and often shunned emotion in North American society, as is drug addiction. The poems allow emotion while never losing their aural power.

Catherine Owen lives in New Westminster, BC. She is the author of ten collections of poetry, among them Designated Mourner (ECW, 2014), Trobairitz (Anvil Press 2012), Seeing Lessons (Wolsak & Wynn 2010) and Frenzy (Anvil Press 2009). Her poems are included in several recent anthologies such as Forcefield: 77 Women Poets of BC (Mothertongue Press, 2013) and This Place a Stranger: Canadian Women Travelling Alone (Caitlin Press, 2014). Stories have appeared in Urban Graffiti, Memwear Magazine, Lit N Image (US) and Toronto Quarterly. Her collection of memoirs and essays is called Catalysts: Confrontations with the Muse (W & W, 2012). Frenzy won the Alberta Book Prize and other collections have been nominated for the BC Book Prize, ReLit, the CBC Prize, and the George Ryga Award. In 2015, Wolsak & Wynn published her compendium on the practices of writing called The Other 23 and a Half Hours or Everything You Wanted to Know That Your MFA Didn’t Teach You. She works in TV, plays metal bass and blogs at Marrow Reviews.

“Grief is a challenging subject at the best of times, but Owen manages to deftly sidestep the temptations to idealize or to wallow. Presented utterly without irony, these poems are tender and sweet, yet never become cloying . . . Designated Mourner is raw emotion beautifully wrought, and I wept openly as I read.” —Broken Pencil

"In the vein of Carol Ann Duffy's Raptures, Designated Mourner tenderly surrenders Owen's emotions and vulnerability to the page."  — Quill and Quire

"In her capable poetic hands — Owen is author of nine books of verse and criticism — emotions find crystalline expression and these pieces attain indelible life for their deft separating of what is truly important from the emotional chaff that occupies a typical life." — Vancouver Sun

Other titles by Catherine Owen

The Day of the Dead

Day of the Dead

Confrontations with the muse