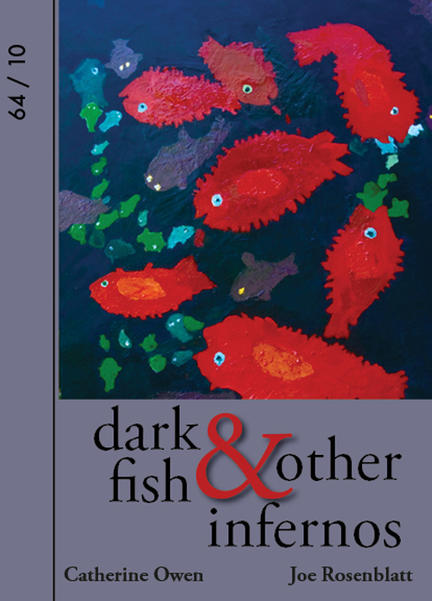 Rosenblatt has been Writer-in-Residence and visiting lecturer at the University of Victoria, University of Western Ontario and has traveled extensively for readings in Italy(many of his books have been translated into Italian), Sweden and Finland. In 1976 his book Top Soil won the Governor General’s Award for poetry. His work has appeared in more than 50 anthologies and literary magazines. Of his 17 books to date, his most recent title is The Voluptuous Gardener (Beach Holme, 1996), though in the early 90s he also published A Tentacled Mother, Bed & Consenting Dreamers and The Rosenblatt Reader with Exile Press.

Catherine Owen lives in New Westminster, BC. She is the author of ten collections of poetry, among them Designated Mourner (ECW, 2014), Trobairitz (Anvil Press 2012), Seeing Lessons (Wolsak & Wynn 2010) and Frenzy (Anvil Press 2009). Her poems are included in several recent anthologies such as Forcefield: 77 Women Poets of BC (Mothertongue Press, 2013) and This Place a Stranger: Canadian Women Travelling Alone (Caitlin Press, 2014). Stories have appeared in Urban Graffiti, Memwear Magazine, Lit N Image (US) and Toronto Quarterly. Her collection of memoirs and essays is called Catalysts: Confrontations with the Muse (W & W, 2012). Frenzy won the Alberta Book Prize and other collections have been nominated for the BC Book Prize, ReLit, the CBC Prize, and the George Ryga Award. In 2015, Wolsak & Wynn published her compendium on the practices of writing called The Other 23 and a Half Hours or Everything You Wanted to Know That Your MFA Didn’t Teach You. She works in TV, plays metal bass and blogs at Marrow Reviews.

Other titles by Joe Rosenblatt

Musings on Monsters and Mayhem

The Bird in the Stillness

Brides Of The Stream

Tommy Fry and the Ant Colony

Other titles by Catherine Owen

The Day of the Dead

Day of the Dead

Confrontations with the muse