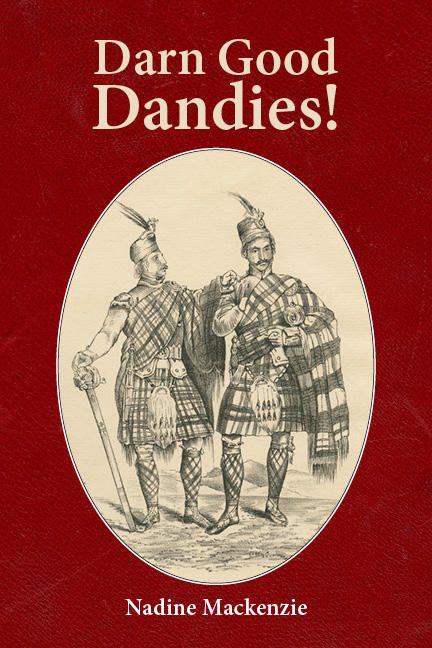 In 1882, in the midst of a current fervour for tartans and all things Scottish, two brothers published Vestiarium Scoticum, a replica of an ancient catalogue of ancestral clan tartans that they claimed to have been found in a monastery in France. While the book was enthusiastically received by both the public and the clothing industry, there were doubters and critics and claims of outright fraud. But the book persisted and today more than 70 of its tartans are still being worn by the various clans, and many still believe that the ancestral designs go back to the dawn of time. Was Vestiarium Scoticum a genuine ancient text? Or was it a monumental fraud on the public? And who were these so-called “brothers” who claimed to be the grandsons of the Young Pretender, Bonnie Prince Charlie? Darn good Dandies! weaves its way through the lives and mysteries and countless name changes of the eccentric Sobieski Stuart brothers.

NADINE MACKENZIE lives in Calgary, Alberta. She has more than 25 books published in French: children’s literature, novels, biographies and history. Her latest work entitled Du sang bleu dans l’ouest du Canada (Blue Blood in the West of Canada) has received an official “Century Certification” to commemorate the First World War from the French Government. This is the only one to be awarded in Canada. She was previously a journalist and now works as a conference interpreter. She has a M.A. in History of Music from the University of La Sorbonne and has done Musicology and History of the Arts Research at the University of Vienna. Nadine Mackenzie has also received a certificate in Fundamentals of Petroleum from the University of Texas and a certificate in Business Management from the Institute of Public Affairs of Dalhousie University. Her free time is spent riding horses.

In the late 1860s in London, in the Pimlico district where they resided, two tall elderly men attracted the attention of passers-by with their impressive and unusual appearance. Their hair was separated into long ringlets, in the male aristocratic hairstyle of the previous century. Their coats were cut in an old military style andwere decorated with many medals and various orders. They wore riding boots with spurs, and the spurs were attached by clanking chains to their narrow trousers. Each day they would walk to the British Museum Library dressed in this obsolete garb, making a metallic clatter. A reading room was reserved for them at all times. There, upon a table, were placed their own ink and their paperweights engraved with gold crowns. They spent most of their time writing, studying and poring over books, documents and manuscripts. They were called the Sobieski Stuart brothers. When the elder of the two died, the younger brother continued the same routine for a while, but he too in turn departed this life. The Sobieski Stuarts left their mark in history thanks to their published literary works, which alluded to their possible royal descent. Their most important book was Vestiarium Scoticum (The Wardrobe of the Scots), which listed 75 so-called ancestral tartans. The authenticity of this masterpiece was vehemently contested some years after its publication. However, even today, Vestiarium Scoticum is still the reference book for specialists in the tartanmaking textile industry. Until their death, the brothers intimated that they were the grandsons of Charles Edward Stuart, the last pretender to the throne of Scotland, England and Ireland. Were they just fanciful eccentrics, or were there well-founded reasons for them to make such a claim? In another book, called Tales of the Century, they presented their rather extravagant, devious and obscure claims to the monarchy. In Scotland they were called “princes”, and during their short or long sojourns there the inhabitants always made their tribute and showed great deference to them. The brothers’ claim to be related to the royal Stuarts was complicated by the fact that during their lives they took a variety of surnames. The elder brother, John Carter, whose real family name was Allen and whose first name was sometimes Ian, successively called himself Hay, Allan, Hay Allen or Allen Hay, Sobieski Stolberg and finally Sobieski Stuart.* The younger used the names of Charles Manning Allen, Manning Allan, Stuart-Allan, Allan Stuart, Allen-Stuart, Stuart Hay and finally, Charles Edward Stuart. They carried in turn the title of Count of Albany, a title that had been used by Charles Edward Stuart. People whispered that they had served in Napoleon’s armies, and that this explained the military decorations pinned to their clothing. It was also said that one of them had been decorated with the Legion of Honour by none other than the Emperor himself. The saga of the Sobieski Stuart brothers is fascinating because it presents a chronology of confirmed verifiable facts mixed with very questionable features. In the fog of mystery are intertwined history, genealogy and sociology. Two unanswered questions occur in all the literature about the Sobieski Stewarts: was there truth in their claims to the Royal Stuart line, and was the information in their book Vestiarium Scoticum genuine? But there was a third question no one seemed to be asking. Were they really blood brothers? Were they even related? Sometimes investigative research can untangle the web of an enigma, and discover, before exiting the maze, a different story, a story which no one had previously contemplated.