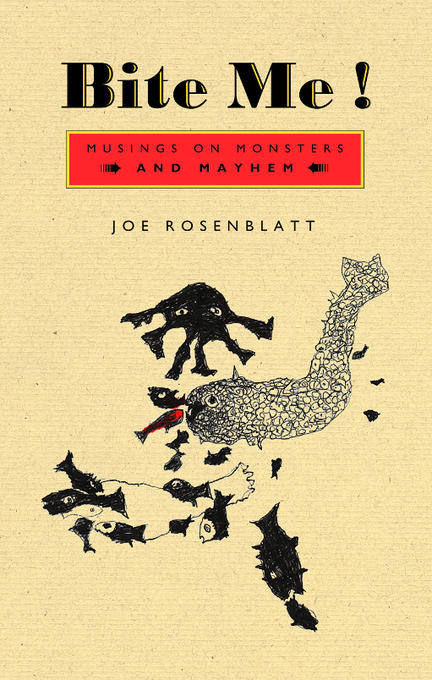 Joe Rosenblatt delights in revealing a fantastical hidden world of ravenous monsters and rapacious critters of all sorts-one in which 'either you're the eater, or the one who'll be consumed'.

Rosenblatt has been Writer-in-Residence and visiting lecturer at the University of Victoria, University of Western Ontario and has traveled extensively for readings in Italy(many of his books have been translated into Italian), Sweden and Finland. In 1976 his book Top Soil won the Governor General’s Award for poetry. His work has appeared in more than 50 anthologies and literary magazines. Of his 17 books to date, his most recent title is The Voluptuous Gardener (Beach Holme, 1996), though in the early 90s he also published A Tentacled Mother, Bed & Consenting Dreamers and The Rosenblatt Reader with Exile Press.

Excerpt: Bite Me!: Musings on Monsters and Mayhem (by (author) Joe Rosenblatt)

In Bite Me! I am letting the famished imagination out on a field trip. It matters little whether I am following the explorations of ethnobotanists or zoologists-what I am keenly interested in is the bizarre side of Mother Nature's handiwork in the wilds of a tropical rainforest. I have this obsession with undiscovered gigantism in boa constrictors assumed to be extinct, relegated to prehistory along with the dinosaur. I want to chant a mantra in celebration of those lengthy elongated reptiles: 'Come out of hiding, I know you are there.'

But are they there, those primeval super-snakes slithering about, who according to some researchers in herpetology are a mind-blowing eighty feet long with a girth of five or more feet-besting those present-day anacondas half that length with a girth, on average, of a mere metre?

What especially provides a stimulant for the appetite of my hungry muse, more than snakes with lengthy trains, are pitcher plants who manage to lure small mammals to their deaths. To sustain those monsters, the poor devils end up liquefied as essential protein in their bellies.

And as if this bent fascination in giant reptiles isn't enough, I am earnestly interested in hearing about man-eating plants. As yet, I have not seen any scholarly articles in any reputable science journal having to do with those leafy carnivores preying on humans, but that doesn't mean those floriated monsters, having acquired a taste for human flesh, aren't around-waiting patiently for their next weighty meal in some steamy setting in the Amazon basin. In the meantime, I will settle for the commonplace: an octopus snacking on a seagull, or a Conger Eel going for the leg of a diver.

What especially fascinates me and excites my ravenous muse is the marine life existing at the bottom of the deepest oceans, bioluminescent critters that appear like ghostly mermaids to mariners gazing through the window of their bathysphere. It borders on the supernatural, for what is one to make of those colossal clams inhaling the noxious fumes of an active volcanic chimney belching fire, or a lumbering gigantic squid approaching that bathysphere with the intention of embracing it with its sprawling tentacles?

'Bite me!' said an extended leg to a conger eel
comfortably sheltered deep inside a briny cave.
Gritting all his teeth-he was not a pretty sight.
A lengthy demon, more a snake than a fish
lashed out-tore off a generous hunk of meat.
His vibrating jaws invoked a symphonic poem
as he wriggled his body and beamed out a smile.
'You've eaten him!' shrieked the remaining limb.

Soon it, too, was eaten by that burbling diner
who, in exalting praise of his meal, spewed out
a stream of flesh, bits of bone, bristle, and blood.
I kept on descending into a malaise of despair
while each of my arms pleaded 'Bite me!'
to an approaching monster who wore my face.

'Joe Rosenblatt offers a phantasmagoria of "the bizzare side of Mother Nature's handiwork" in a collection of poetry that showcases creatures and beasts from reality and the farthest reaches of the imagination. Domesticated felines and the denizens of the tropical rainforest are here, as are bioluminescent fish from the bottom of the ocean and "flesh-liquefying stomach acid."'

'[Joe Rosenblatt's] final book plunges into offshore depths, sweats its path through tropical rainforests, and soars ''above those lingering puffs of smoky acrid clouds,'' to bring together the elements-wet, dry, hot and windy-of his whole lyrical ''monsterology,'' both a culmination and a continuation of all that went before....

Disgusting? Well, yes, but no. The language is so rich, the pace so exhilarating, the images so startling, and the wit so wry that one cannot pause for disgust.

'[Rosenblatt's] sure, steady authorial voice and his courageous willingness to look into the luminous darkness at the centre of the human heart make this difficult material into a compelling beauty.'

'These days the need to escape our everyday reality is palpable. With surprising depth and incredible syntax, Joe Rosenblatt's Bite Me! offers a chance to slip into a light-hearted fantasy world filled with creatures and camp.'

Other titles by Joe Rosenblatt

The Bird in the Stillness

Brides Of The Stream

Tommy Fry and the Ant Colony