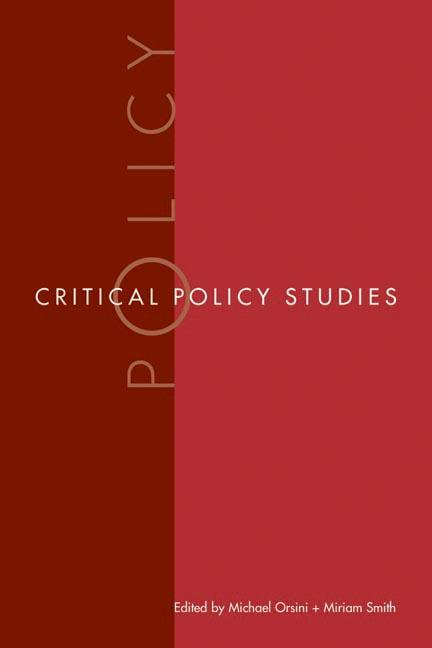 Traditional definitions of public policy in Canada have been challenged in recent years by globalization, the transition to a knowledge-based economy, and the rise of new technologies. Critical Policy Studies describes how new policy problems such as border screening and global warming have been catapulted onto the agenda in the neo-liberal era. The book also surveys the recent evolution of critical approaches to policy studies, which have transformed decades-old issues.

Contributors conceptualize the ways in which public policy questions cut across the traditional fields of policy. They cover both topical approaches such as Foucauldian and post-empiricist analysis and new applications of established perspectives, such as political economy. Conventional methodologies reveal new connotations when used to explore such topics as security issues, Canadian sovereignty, welfare reform, environmental protocol, Aboriginal policy, and reproductive technologies.

Critical Policy Studies provides an alternative to existing approaches to policy studies, and will be welcomed by scholars, students, and practitioners of political science and public policy.

Michael Orsini is Professor in the School of Political Studies at the University of Ottawa.

Miriam Smith is Professor in the Department of Political Studies at Trent University. Her areas of interest are Canadian and comparative politics, in particular, political economy, social movements, and the lesbian, gay, bisexual and transgender movements in Canada. She is the author of Lesbian and Gay Rights in Canada: Social Movements and Equality-Seeking, 1971-1995 (University of Toronto Press, 1999) and co-editor, with François Rocher, of New Trends in Canadian Federalism (University of Toronto Press, 2003).

Other titles by Michael Orsini

Other titles by Miriam Smith

The Canadian Forum Book on the Federal Constitutional Proposals 1991-1992