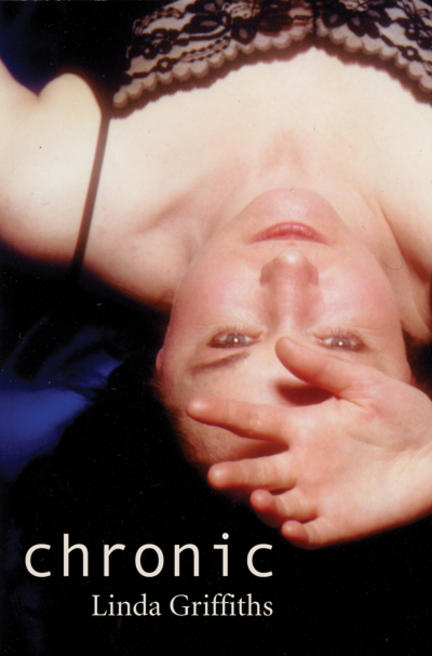 Ostensibly about CFS (chronic fatigue syndrome) and the virus that may or may not cause it, Chronic puts one woman’s dis-ease under the theatrical microscope along with various other pathologies of modern life. At first Petra seems familiarly neurotic, a Woody Allen character refracted through George F. Walker. But as Griffiths examines the psychological, social, and sexual dimensions of Petra’s experience in her desperate pursuit of a cure, as well as her medical treatments, her strange dreams, and the peculiarities of her post-industrial workplace, the stage becomes an environmental petrie dish, a fascinating experiment in the ecology of illness.

Linda Griffiths is an actress, producer, and writer. Griffiths is a founding member of 25th Street Theatre in Saskatoon and one of the original cast members in its collective creation Paper Wheat (1978), which toured sold-out houses across Canada. A year later, she performed in another collective creation, Les Maudits Anglais, in Montreal under the direction of future co-writer, Paul Thompson. Griffiths’s first major success came when she and Thompson collaborated to write Maggie and Pierre, a one-person, three-character play that bases its narrative structure on events in Pierre and Margaret Trudeau’s life together. Maggie and Pierre toured Canada, played the Royal Alexandra Theatre in Toronto, and Off Broadway at the Phoenix Theatre.

Other titles by Linda Griffiths

Who Wants to Play?

The Last Dog of War

A Visitation From Gwendolyn MacEwen

Maggie and Pierre & The Duchess

The Book of Jessica

A Duet for Three

Other titles by Jerry Wasserman

Empire of the Son