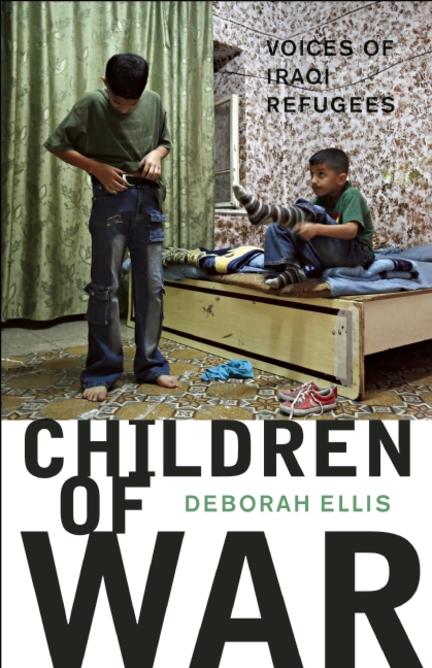 In this book, Deborah Ellis turns her attention to the most tragic victims of the Iraq war -- Iraqi children. She interviews young people, mostly refugees living in Jordan, but also a few who are trying to build new lives in North America. Some families have left Iraq with money; others are penniless and ill or disabled. Most of the children have parents who are working illegally or not at all, and the fear of deportation is a constant threat.

Ellis provides an historical overview and brief explanations of context, but other than that allows the children to speak for themselves, with minimal editorial comment or interference. Their stories are frank, harrowing and sometimes show surprising resilience, as the children try to survive the consequences of a war in which they played no part. A glossary, map and suggestions for further information are included.

A must...read, this book really helps raise awareness of the vulnerable and heartbreaking situation of refugees, and is likely to inspire social justice-oriented readers to start advocating on their behalf.

...The voices are poignant, insightful, angry and hopeful...Photographs of the interviewes and a glossary round out an important chronicle of war and the world's most vulnerable-the children.

The Stories are poignant, heart wrenching, and ring with truth...†...a starting point for a disscussion on the impact of war on children from the childs perspective.

Ellis gives children a voice that they may not otherwise have the opportunity to express so readily in the mainstream media...[Children of War] exposes the complexity of the issues surrounding the war, and discourages any simplistic understandings that her readers may have held about the war's origins...A significant strength of this book is its accessibility for readers of all ages and cultural backgrounds...Highly recommended.

An important, current title that will have lasting significance.

...there's no real room for doubt that [the children's] grim attitudes...[and] outlook on the future, are painfully authentic.

Bulletin of The Center for Children's Books

A collection of heartrending entries based on interviews with displaced kids...The introduction offers a clear, concise summary of the events...and the photographs accompanying the stories personalize the harrowing plights.

Eye-opening...unforgettable and thought-provoking...the contrast between the simple language of these child refugees and the horrific events they relate is wrenching.

Listen to the voices of 23 Iraqi children, aged eight to 19, who have fled war and their homes. In their own words, they confide what it means to be a refugee. An introduction offers a historical overview and sets the context for the accounts shared by the children. A glossary, a map and further-information suggestions are included.

This is a celebration of the power of one and the accomplishments of nine children who have worked to promote world peace. The young pacifists hail from Canada, Colombia, Liberia, Bosnia, Japan, Great Britain, Cambodia, Afghanistan and the United States. Paintings, poems and colour photos illustrate this inspiring collection.

Living Bravely through a Never-ending War