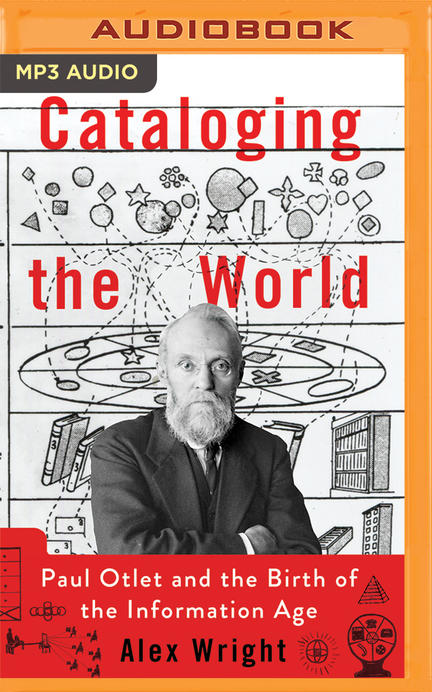 The dream of capturing and organizing knowledge is as old as history. From the archives of ancient Sumeria and the Library of Alexandria to the Library of Congress and Wikipedia, humanity has wrestled with the problem of harnessing its intellectual output. The timeless quest for wisdom has been as much about information storage and retrieval as creative genius.

In Cataloging the World, Alex Wright introduces us to a figure who stands out in the long line of thinkers and idealists who devoted themselves to the task. Beginning in the late 19th century, Paul Otlet, a librarian by training, worked at expanding the potential of the catalog card, the world's first information chip. From there followed universal libraries and museums, connecting his native Belgium to the world by means of a vast intellectual enterprise that attempted to organize and code everything ever published. Forty years before the first personal computer and fifty years before the first browser, Otlet envisioned a network of "electric telescopes" that would allow people everywhere to search through books, newspapers, photographs, and recordings, all linked together in what he termed, in 1934, a reseau mondial essentially, a worldwide web.

Otlet's life achievement was the construction of the Mundaneum, a mechanical collective brain that would house and disseminate everything ever committed to paper. Filled with analog machines such as telegraphs and sorters, the Mundaneum, what some have called a "Steampunk version of hypertext" was the embodiment of Otlet's ambitions. It was also shortlived. By the time the Nazis, who were pilfering libraries across Europe to collect information they thought useful, carted away Otlet's collection in 1940, the dream had ended. Broken, Otlet died in 1944.

Wright's engaging intellectual history gives Otlet his due, restoring him to his proper place in the long continuum of visionaries and pioneers who have struggled to classify knowledge.

Alex Wright is a professor of interaction design at the School of Visual Arts and a regular contributor to The New York Times. He is the author of Glut: Mastering Information through the Ages.