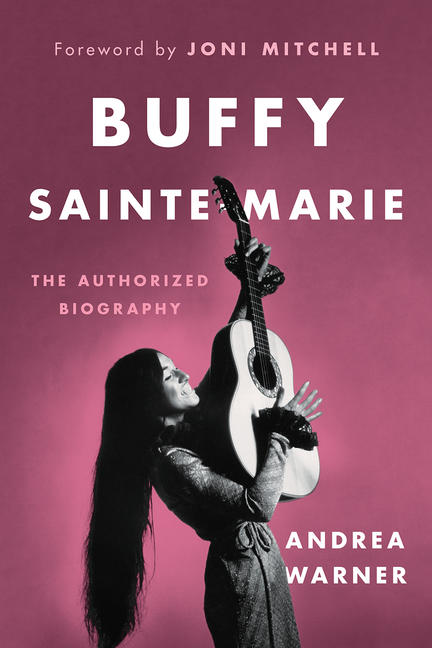 "Buffy Sainte-Marie is an icon and inspiration. This book is necessary—an authorized insight into the making of a legend." —Terese Marie Mailhot, author of Heart Berries

A powerful, intimate look at the life of a beloved folk icon and activist.

Folk hero. Songwriter icon. Living legend. Buffy Sainte-Marie is all of these things and more. In this, Sainte-Marie’s first and only authorized biography, music critic Andrea Warner draws from more than sixty hours of exclusive interviews to offer a powerful, intimate look at the life of the beloved artist and everything that she has accomplished in her seventy-seven years (and counting).

Since her groundbreaking debut, 1964’s It’s My Way!, the Cree singer-songwriter has been a trailblazer and a tireless advocate for Indigenous rights and freedoms, an innovative artist, and a disruptor of the status quo. Establishing herself among the ranks of folk greats such as Joni Mitchell and Bob Dylan, she has released more than twenty albums, survived being blacklisted by two U.S. presidents, and received countless accolades, including the only Academy Award ever to be won by a First Nations artist. But this biography does more than celebrate Sainte-Marie’s unparalleled talent as a songwriter and entertainer; packed with insight and knowledge, it offers an unflinchingly honest, heartbreakingly real portrait of the woman herself, including the challenges she experienced on the periphery of showbiz, her healing from the trauma of childhood and intimate partner violence, her commitment to activism, and her leadership in the protest movement.

Andrea Warner writes about music, feminism, and pop culture and is the author of We Oughta Know: How Four Women Ruled the ’90s and Changed Canadian Music. She contributes to CBC Music, Pitchfork, the Georgia Straight, and Exclaim! and co-hosts the podcast Pop This!

Other titles by Andrea Warner

How Four Women Ruled the ’90s and Changed Canadian Music

Morning Glory on the Vine

June is Indigenous History Month, a great opportunity to celebrate some of our favourite books over the years, along with links to great interviews, excerpts, …