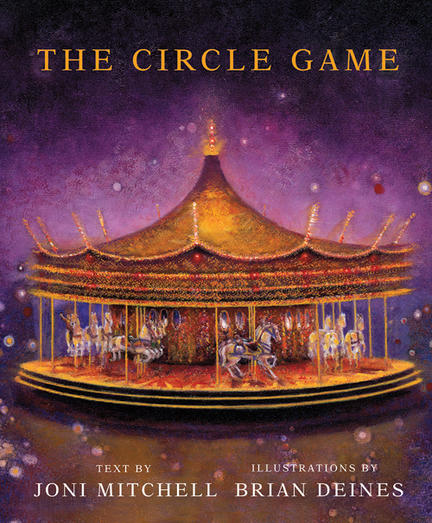 More than forty years ago, Joni Mitchell’s music helped define a generation of young people. Now, one of her classic songs is introduced to a new generation through the remarkable art of Brian Deines.

The Circle Game, a charming nod to childhood dreams and memories, tells the story of a young boy experiencing the simple wonders of life: dragonflies in jars, the night sky, frozen streams, and carousels. As the years go by, cartwheels are replaced by car wheels and the boy’s dreams change, but the sense of wonder remains. The Circle Game captures the timeless magic of youth.

BRIAN DEINES has illustrated numerous books for children, including SkySisters

and One Hockey Night (written by DavidWard). He has been nominated for

numerous awards, including the Governor Generalâ€™s Literary Award, the Ruth and

Award, and the Lillian Shepherd Memorial Award. A native of Red Deer, Alberta,

Brian Deines is an award-winning artist and illustrator. Joni Mitchell is an iconic Canadian songwriter whose lyrics have fashioned a generation of Canadians. Together, they have created a treasure of a picture book/gift book for a graduation or to mark the birth of a child.

For those not familiar with the song, Mitchell’s words take us through the simple story of a boy’s growing years from young child to young man, with a chorus that evokes the “carousel of time.” Her lyrics about change give enduring hope — the boy will carry the gifts of magic and wonder with him through life. From a child enthralled by a dragonfly inside a jar, the boy grows and “looks behind from where he came.” When he is older, he makes wishes for “new dreams, maybe better dreams before the last revolving year is through.”

Brian Deines’ magical oil paintings and luminescent endpapers, rich with colour, cover each double-page spread. From cartwheels to car wheels, the light wraps around the images. The illustration of the carousel that reappears with each chorus is so meticulous the readers can imagine themselves seated just behind the main character, astride a carousel pony, watching the years begin to spin. We feel the smooth texture of the painted pony post we hold. Readers who give the book as a gift celebrate the recipient’s promise of a bright future. In addition, there are pages detailing the accomplishments of Joni Mitchell and Brian Deines, as well as a website where readers can listen to a recording of Joni’s song.

Other titles by Brian Deines

A Bear in War

A Journey to Peace

Bear on the Homefront

On a Snowy Night

Morning Glory on the Vine