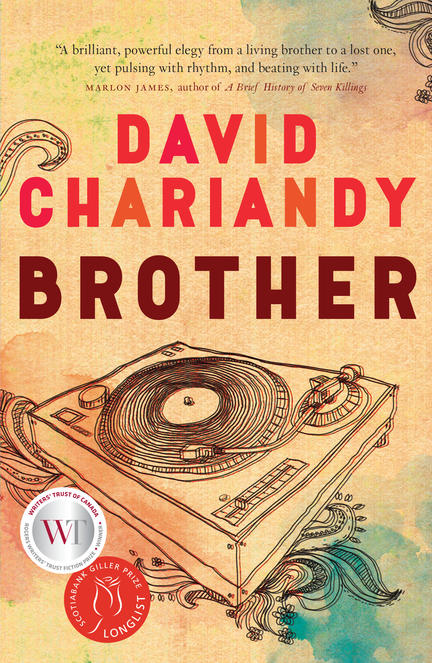 The long-awaited second novel from David Chariandy, whose debut, Soucouyant, was nominated for nearly every major literary prize in Canada and published internationally.

An intensely beautiful, searingly powerful, tightly constructed novel, Brother explores questions of masculinity, family, race, and identity as they are played out in a Scarborough housing complex during the sweltering heat and simmering violence of the summer of 1991.
With shimmering prose and mesmerizing precision, David Chariandy takes us inside the lives of Michael and Francis. They are the sons of Trinidadian immigrants, their father has disappeared and their mother works double, sometimes triple shifts so her boys might fulfill the elusive promise of their adopted home.
Coming of age in The Park, a cluster of town houses and leaning concrete towers in the disparaged outskirts of a sprawling city, Michael and Francis battle against the careless prejudices and low expectations that confront them as young men of black and brown ancestry -- teachers stream them into general classes; shopkeepers see them only as thieves; and strangers quicken their pace when the brothers are behind them. Always Michael and Francis escape into the cool air of the Rouge Valley, a scar of green wilderness that cuts through their neighbourhood, where they are free to imagine better lives for themselves.
Propelled by the pulsing beats and styles of hip hop, Francis, the older of the two brothers, dreams of a future in music. Michael's dreams are of Aisha, the smartest girl in their high school whose own eyes are firmly set on a life elsewhere. But the bright hopes of all three are violently, irrevocably thwarted by a tragic shooting, and the police crackdown and suffocating suspicion that follow.
With devastating emotional force David Chariandy, a unique and exciting voice in Canadian literature, crafts a heartbreaking and timely story about the profound love that exists between brothers and the senseless loss of lives cut short with the shot of a gun.

David Chariandy lives in Vancouver and teaches in the Department of English at Simon Fraser University. His novel Soucouyant has received great attention, including a Governor General's Literary Award nomination for Fiction, a Gold Independent Publisher Award for Best Novel, and the Scotiabank Giller Prize longlist. His most recent novel, Brother, won the 2017 Rogers Writers' Trust of Canada Prize for Fiction.

The world around us was named Scarborough. It had once been called “Scarberia,” a wasteland on the out­skirts of a sprawling city. But now, as we were growing up in the early ’80s, in the heated language of a chang­ing nation, we heard it called other names: Scarlem, Scarbistan. We lived in Scar-bro, a suburb that had mush­roomed up and yellowed, browned, and blackened into life. Our neighbours were Mrs. Chandrasekar and Mr. Chow, Pilar Fernandez and Clive “Sonny” Barrington. They spoke different languages, they ate different foods, but they were all from one colony or the other, and so they had a shared vocabulary for describing feral children like us. We were “ragamuffins.” We were “hooligans” up to no good “gallivanting.” We were what one neighbour, more poet than security guard, described as “oiled crea­tures of mongoose cunning,” raiding dumpsters and garbage rooms or climbing up trees and fire-exit stairs to spy on adults. During winters we snowballed cars on Lawrence Avenue, dipping into the back alleys if the drivers tried to pursue us. A Pinto Wagon once shaving past my face, its wake tugging hard upon my body, Francis’s hand upon my shoulder pulling me safe.

During the day, we had more formal educational opportunities. Our school was named after Sir Alexander Campbell, a Father of Confederation. But we the stu­dents of his school had our own confederations, our own schoolyard territories and alliances, our own trade agree­ments and anthems. We listened to Planet Rock and carried Adidas bags and wore stonewashed jeans and painter caps. You could hear us whenever there were general assemblies in the auditorium, our collective voices overwhelming whatever politely seated ceremony we were supposed to be attending.

Francis and I each served out long sentences in class­rooms beneath the chemical hum of white fluorescent lights, in part out of fear of our mother, who warned us, upon pain of something worse than death, not to squan­der “our only chance.” But Francis actually liked to learn. He read books, and he was a good observer.

And after class was out there were other institutions to learn from. A dozen blocks west of the towers and housing complexes of the Park, at the intersection of Markham and Lawrence, there lay a series of strip malls. There were grocery shops selling spices and herbs under signs in foreign languages and scripts, vegetables and fruits with vaguely familiar names like ackee and eddo. There were restaurants with an average expiry date of a year, their hand-painted signs promising ice cream with the “back home tastes” of mango and khoya and badam kulfi, a second sign written urgently in red marker promising that they’d also serve, whenever asked, the mystery of “Canadian food.”

“Chariandy's second novel, Brother . . . is a supremely moving and exquisitely crafted portrait of his hometown. . . . It is a celebration and a reckoning, a study of community and of family and of the ways each relies on the other, and of the power of art to build and the ability of those in power to destroy. It is also an act of literary cartography, an attempt to place Scarborough on the CanLit map, once and for all, and an effort by Chariandy to show ‘the importance of knowing that your world – in its beauty, in its ugliness, in its heroism, in its cowardice – [can] also be worthy of representation.’” —Mark Medley, Globe and Mail

“[Brother is] a beautiful piece of literature—a coming of age story, a meditation on family, a novel of place—but that place is the same much maligned suburb Chariandy grew up in, and the younger brother’s life in a racist milieu is central to novel’s power.”—Brian Bethune, Maclean’s Magazine

“With Brother, Chariandy has written a book worth reading through an entire library to find.”—Hannah Sung, Globe and Mail

“Brother is an exquisite novel, crafted by a writer as talented and precise as Junot Díaz and Dinaw Mengestu. It has a beating heart and a sharp tongue. It is elegant, vital, indubitably dope – the most moving book I’ve read in a year.” —The Guardian

"Brother diffracts the spare light toward feeling again, after tragedy. Chariandy deftly assembles that which has come apart in the life of a Black family; their privacies assaulted, their desires unmet. Such a timbrous novel. Such a tender work." —Dionne Brand

"A brilliant, powerful elegy from a living brother to a lost one, yet pulsing with rhythm, and beating with life." —Marlon James, author of A Brief History of Seven Killings
"Mesmerizing. Poetic. Achingly soulful. Brother is a pitch-perfect song of masculinity and tenderness, and of the ties of family and community." —Lawrence Hill, author of The Book of Negroes and The Illegal
"I love this novel. Riveting, composed, charged with feeling, Brother surrounds us with music and aspiration, fidelity and beauty." —Madeleine Thien, author of Do Not Say We Have Nothing

Other titles by David Chariandy

I've Been Meaning to Tell You

A Letter to My Daughter

A Hyphenated Existence: Richness and Challenge