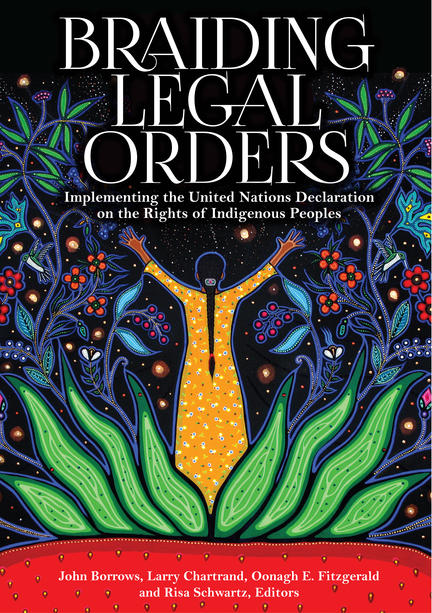 Implementation in Canada of the United Nations Declaration on the Rights of Indigenous Peoples (UNDRIP) is a pivotal opportunity to explore the relationship between international law, Indigenous peoples' own laws, and Canada's constitutional narratives.

Two significant statements by the current Liberal government – the May 2016 address by Indigenous Affairs Minister Carolyn Bennett to the Permanent Forum on Indigenous Issues at the United Nations and the September 2017 address to the United Nations by Prime Minister Justin Trudeau – have endorsed UNDRIP and committed Canada to implementing it as “a way forward” on the path to genuine nation-to-nation relationships with Indigenous peoples. In response, these essays engage with the legal, historical, political, and practical aspects of UNDRIP implementation. Written by Indigenous legal scholars and policy leaders, and guided by the metaphor of braiding international, domestic, and Indigenous laws into a strong, unified whole composed of distinct parts, the book makes visible the possibilities for reconciliation from different angles and under different lenses.

John Borrows is the Canada Research Chair in Indigenous Law in the Faculty of Law at the University of Victoria and is the winner of both the Canadian Political Science Association’s Donald Smiley Prize (for Recovering Canada) and the Canadian Law and Society Association Book Prize (for Canada’s Indigenous Constitution)..

Larry Chartrand is academic director of the Native Law Centre at the University of Saskatchewan.

Oonagh Fitzgerald is the acting chief legal counsel and manager of the Public Law Sector, Justice Canada, comprising specialized public law advisory, policy, and international litigation functions. Previously, she served as special advisor for international law at Justice Canada, and she continues to have responsibility to promote, support, and coordinate the Department of Justice's work in the field of international law. Before that, she held public law positions as director of the International Law Section, senior counsel for regulatory reform in the Constitutional and Administrative Law Section, and counsel in the Human Rights Law Section. Before joining the Department of Justice, Oonagh was counsel at the Immigration Appeal Board, commerce officer at the Competition Bureau, and legal consultant at the Law Reform Commission of Canada.

Oonagh has a Bachelor of Fine Arts, Bachelor of Laws, Masters of Law, and a Doctorate of Juridical Science, and she is a member of the Ontario Bar. She has written two books, Understanding Charter Remedies and The Guilty Plea and Summary Justice, and a number of articles. She has taught at Carleton University Law Department, Ottawa University Law Faculty, and the International Institute for Human Rights.

Other titles by John Borrows

Reimagining the Implementation of Historical Treaties

An Anishnabe Understanding of Treaty One

The Resurgence of Indigenous Law

Other titles by Oonagh E. Fitzgerald

New Perspectives on the Globalized Rule of Law

The International Law Implications of Brexit

The Globalized Rule of Law

Relationships between International and Domestic Law