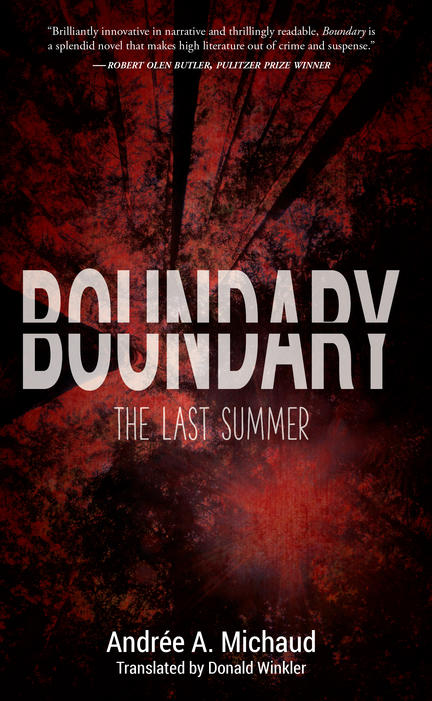 Longlisted for the 2017 Scotiabank Giller Prize

In the deep woods of the Maine borderlands, the legend of huntsman Pete Landry is still told around cottage campfires to scare children, a tragic story of love, lust, and madness. During the early summer of 1967, inseparable teenage beauties Sissy Morgan and Zaza Mulligan wander among the vacation cottages in the community of Boundary, drinking and smoking and swearing, attracting the attention of boys and men. First one, and then the other, goes missing, and both are eventually found dead in the forest. Have they been the victims of freak accidents? Or is someone hunting the young women of Boundary? And if there is a hunter, who might be next? The Summer of Love quickly becomes the Summer of Fear, and detective Stan Michaud, already haunted by a case he could not solve, is determined to find out what exactly is happening in Boundary before someone else is found dead.

A story of deep psychological power and unbearable suspense, Andrée A. Michaud’s award-winning Boundary is an utterly gripping read about a community divided by suspicion and driven together by primal terror.

Since La Femme de Sath, a book acclaimed by critics in Quebec, andrée a. michaud has built a distinguished oeuvre. Her fifth novel, Le Ravissement, won a Governor General’s Award for Fiction in 2001 and was nominated for several other prizes, as was Le Pendu de Trempes. Her eighth novel was published to great acclaim in October 2006 by Éditions Québec Amérique.

“One of 2017’s finest reads yet... there’s no simplicity in the questions of existence at hand, but in Michaud’s Boundary, readers will find freedom: a skilled, award-winning author stretching folklore without leaping from truth and within crafting a true thriller, lyrical and satisfying, taut and beautifully told.”—National Post

“The book features two murders and a pair of sleuth figures (hence the Arthur Ellis), but it often seems less a whodunit and more a literary meditation on the impact of the killings on the small community, Boundary, where they took place (hence, the GG Award).”—Toronto Star

“A dense and beautiful novel about the human condition... While most crime novels put the murder center stage, this one instead uses the crime to deeply examine the complexity of what it means to be alive... Spellbinding.”—Kirkus Reviews, STARRED REVIEW

“Brilliantly innovative in narrative and thrillingly readable, Boundary is a splendid novel that makes high literature out of crime and suspense. I am an instant and ardent fan of Andrée A. Michaud.”—Robert Olen Butler, Pulitzer Prize winner

“Atmospheric and haunting, this novel about the lingering effects of violence is impossible to turn away from.”—Foreword Reviews

“While it has an element of the whodunit, this lushly written, award-winning francophone novel is literary crime-writing in which the texture of period and place takes priority.”—Sunday Times

“The style is dense, lyrical, sometimes hallucinatory, often beautiful... It is a difficult book to put down, but less because we are anxious for a plot resolution than because we are held in a sort of spell woven out of a particular historical moment and a timeless tension between a state of innocence and its inevitable loss.”—Reviewing the Evidence

“The literary thriller exists. Andrée A. Michaud is the proof.”—La Presse

“The writing is impassioned, inspired. The pace is breathless, yet punctuated by scenes of everyday family life.”—Le Devoir

"Speaks to a confluence of borders—geographical, cultural, and temporal—and replicates and blurs them to great effect... Beautifully written and compelling, this book will prompt important conversations, as will Michaud’s adept handling of cultural difference, which is well represented even in translation."—Canadian Literature

Books about road trips, swimming, canoe paddling, long lazy days, and even a little bit of summer intrigue. These are the books that means summer starts …