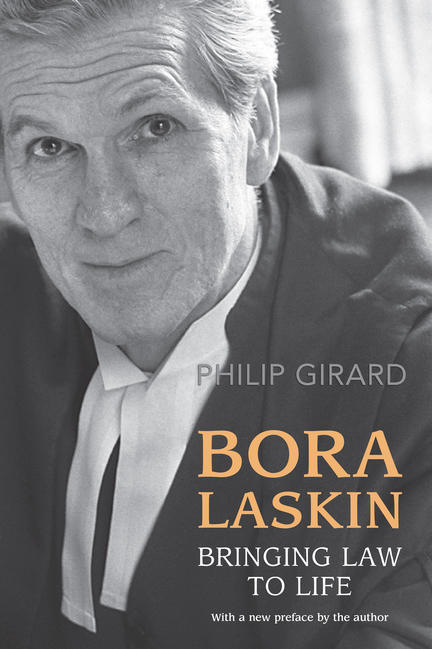 In any account of twentieth-century Canadian law, Bora Laskin (1912-1984) looms large. Born in northern Ontario to Russian-Jewish immigrant parents, Laskin became a prominent human rights activist, university professor, and labour arbitrator before embarking on his 'accidental career' as a judge on the Ontario Court of Appeal (1965) and later Chief Justice of Canada (1973-1984). Throughout his professional career, he used the law to make Canada a better place for workers, racial and ethnic minorities, and the disadvantaged. As a judge, he sought to make the judiciary more responsive to modern Canadian expectations of justice and fundamental rights.

In Bora Laskin: Bringing Law to Life, Philip Girard chronicles the life of a man who, at all points of his life, was a fighter for a better Canada: he fought antisemitism, corporate capital, omnipotent university boards, the Law Society of Upper Canada, and his own judicial colleagues in an effort to modernize institutions and re-shape Canadian law. Girard exploits a wealth of previously untapped archival sources to provide, in vivid detail, a critical assessment of a restless man on an important mission.

Philip Girard is University Research Professor and Professor of Law, History and Canadian Studies at Dalhousie University, where he is based at the Schulich School of Law. He has published widely on Canadian and comparative legal history. His biography Bora Laskin: Bringing Law to Life (Osgoode Society, 2005) received the Chalmers Award for the best book published in Ontario history in that year, while his Lawyers and Legal Culture in British North America: Beamish Murdoch of Halifax (Osgoode Society, 2011) received the Clio Atlantic award from the Canadian Historical Association in 2012. He is the associate editor of the Osgoode Society for Canadian Legal History.

Other titles by Philip Girard