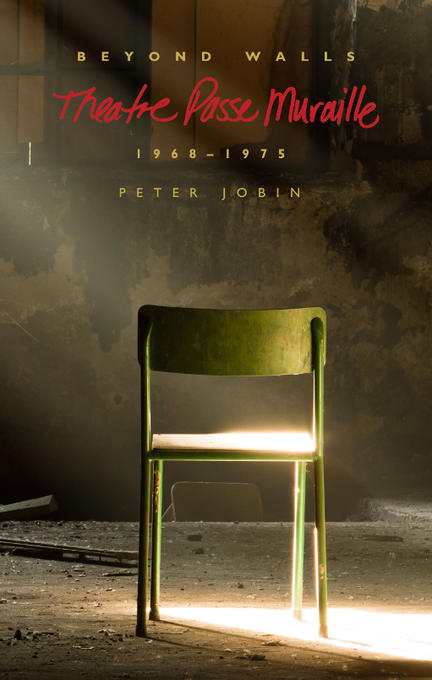 Beyond Walls is an insider's look at the early development of Theatre Passe Muraille, from its origin as radical and provocative theatre company out of Rochdale College to its evolution into a Toronto cultural institution that has helped to shape Canadians' perception of homegrown theatre.

Peter Jobin is an actor and writer who has participated in Canadian theatre and film for over fifty years. Born in Montreal, he appeared in plays in Canada, the USA and the UK before beginning a career as a screenwriter. He is known for films such as Happy Birthday to Me (1981) and Diamond Cut Diamond (2001). He lives in Toronto.

Lionel Douglas was a major force during the glory days of Rochdale. A master raconteur and polymath he could work a room like nobody's business, and had an amazing vision of that not yet done. He loved photography and Ducati motorcycles. The former you will enjoy in these pages, the latter killed him.

Bob Nasmith was, briefly, president of Rochdale and a photographer. Most of his photographic work (both his work as a combat photographer in Vietnam and his later work) did not survive the whips and scorns of time but his association with Theatre Passe Muraille as artist and board member has lasted 48 years. He is quite a good actor.

David Ferry is a director, dramaturge, actor, and teacher. He was the consulting artistic director of Resurgence Theatre Company and the York Shakespeare Festival. David was also artistic director of Bluewater Summer Playhouse in Kincardine, Ontario from 1998â??2002. David won the 2006 Dora Mavor Moore Award for Best Direction for The Last Days of Judas Iscariot (also Best Production Dora) and was invited to the 2006 Festival Intercity in Florence, Italy where he directed Brendan Gallâ??s Alias Godot in Italian. As a dramaturge, David has worked with a number of writers including Florence Gibson MacDonald, Brendan Gall, Fides Krucker, Kelly McIntosh, Paul Ledoux, David Smyth, John Roby, James Reaney, Robert Priest, Drew Hayden Taylor, and Tom Walmsley. David has worked as an actor at the Stratford Shakespeare Festival Festival and in most theatres across the country as well as on and off Broadway in New York.

David works as frequently in film, television, and radio as he does on stage, and has been nominated for or won acting awards such as the Dora Mavor Moore, Genie, Gemini, and Nellie. He has taught acting at theatre schools across Canada, and has recorded an internationally recognized CD collection of Canadian dialects for the actor (Canadian, Eh?). David has served on the executives of CAEA, ACTRA, and is currently a Governor of Actra Fraternal Benefit Society. David was a graduate of the National Theatre School of Canada (1973) and has his Master of Fine Arts in Theatre Directing from the University of Victoria (2003), where he focused on the work of James Reaney. In 2011, David was the recipient of the Barbara Hamilton Memorial Award.

On Wednesday, March 5th, 1969, the day the Theatre Passe Muraille production of Futz was scheduled to open, producer William (Bill) Marshall challenged his city, 'We want to see what you can put on in Toronto.' The Toronto Star printed an arousing article, 'Futz brings nudity, bestiality to Toronto stage'. The Toronto Police showed little interest: 'If all it's got to show is a couple of bare mammary glands,' declared a spokesman, 'I don't think we'd even bother with it.' Marshall's producing partners, lawyers Miles O'Reilly and Arthur Pennington, invited crown counsel Peter Rickaby to the opening night. Rickaby was both the complainant and prosecutor in the 1965 obscenity conviction of art gallery owner Dorothy Cameron, still a scandal in Toronto. At the Central Library Theatre, a Toronto Police morality squad plainclothes officer asked Rickaby if, in his opinion, obscenity charges should be laid. 'It would be laughed out of court,' Rickaby told him.

Hours before the opening, the Futz company stage manager telephoned his actors with a warning that the police might charge them right after the performance. To avoid running into any law officers after the opening, the actors made their exit via the theatre fire escape. On Thursday, March 6, after the second night's performance, the Toronto Police preferred charges of 'staging an indecent performance' and the following day legal summonses were issued to the director, Jim Garrard, the three producers, the actors, the stage crew, and even the Central Library's teenage coatroom attendant.

As the play's scheduled three-week run proceeded, new summonses were issued to everyone after each night's presentation, each performance constituting a new offence under the law. The daily legal ceremony was covered by press and television, a major media event. Publicity put ticket sales through the roof. The producers scheduled additional performances and invited the surprised American playwright, Rochelle Owens, to Toronto for interviews. Her rather 'Manhattan' comment was, 'This couldn't happen in New York. All this prurient sex. It's very corny.' Torontonians who weren't offended by 'an indecent performance', as the warrants read, or by the denial of free speech, were unhappy with the rather provincial character of the entire affair. The Toronto Telegram commented, 'The press, the police, and those responsible for the production have this much in common: they have all become excited by a trace of smut.'

[Continued in 'Chapter One, Busted: Theatre Passe Muraille at Rochdale'... ]

Other titles by David Ferry

You're Making A Scene

Our focus on community connections continues with this cross-genre list of twelve recent books that delve into community in singular and fascinating ways.  …