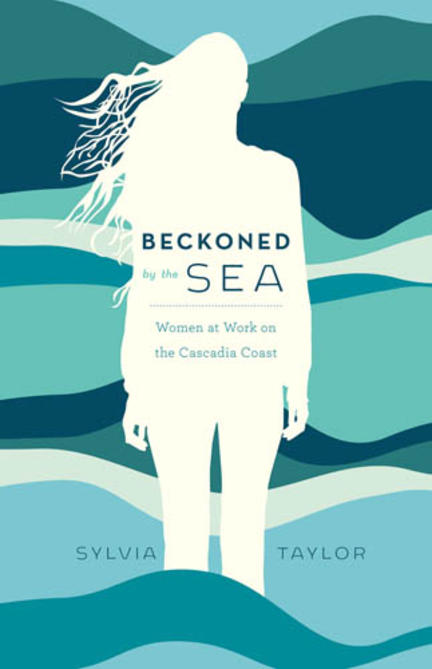 A rich and diverse tapestry weaving together the many voices, narratives, skills, and talents of women up and down the coastal Pacific Northwest who devote their lives and careers to the sea.

Beckoned by the Sea celebrates coastal women from northern BC to northern California who work on or with the sea. The twenty-four women featured in this inspiring and fascinating book represent a variety of industries—from conservation, commercial fishing, and marine biology to safety and rescue, tourism, and the arts.

Weaving together elements of social history, culture, geography, and environmentalism, author Sylvia Taylor draws on in-depth interviews, meticulous research, and her own experience as a deckhand on a commercial fishing boat. Beckoned by the Sea investigates the myriad ways in which women have contributed to the marine industries that sustain the people and shape the culture of North America’s west coast—and reveals how the sea itself has touched the lives of these women by giving them not just a livelihood but an infinite source of inspiration and personal fulfillment.

Sylvia Taylor is an award-winning author, editor, and educator. In addition to her first book, The Fisher Queen: A Deckhand’s Tales of the BC Coast, she has published over four hundred articles and literary pieces in various publications. Taylor currently sits on the board of the Arts Council of Surrey and is a past president and former executive director of the Federation of BC Writers. She teaches writing-related programs and has served on the jury of numerous literary competitions, including the 2013 BC Book Awards in Creative Non-fiction. She lives in White Rock, BC.

Sylvia Taylor presents a masterful portrait of twenty-four women whose lives are entwined with the waters of Cascadia from British Columbia to California. Her insightful and multi-faceted revealing of this unique bioregion ties these stories together and connects the reader to our most precious resource in a compelling and personal narrative.

“The vignettes are clearly drawn from extensive interviews, and a substantial component of each is in the woman’s own words. Taylor provides context and observation for each life history.”

“Much in Beckoned by the Sea is relevant to a new generation of west coast women. … And so along with the expected, and nonetheless gratifying, stories of big seas, greasy engine rooms, and slime skirmishes, Taylor includes profiles of women working as sustainable seafood entrepreneurs, sailing instructors, marine biologists, elected officials, and community activists, among many others.”

“A worthy read. Sylvia Taylor has respectfully researched and written a wonderful tribute to the women who share their souls and tell their compelling stories about all things marine in “Beckoned by the Sea.”

Sylvia Taylor has corralled twenty-four remarkable women of the sea, embedding their stories of growth and adventure in a thoughtful narrative of the times, places, and disciplines. Motivational and entertaining, this book is to be enjoyed and passed on, especially to Millennial readers.

Beckoned by the Sea is a beautiful exploration of the ocean through the eyes of women who have devoted themselves to it. Taylor does a captivating job of portraying twenty-four seafaring women with iconic Cascadia coast livelihoods, from captaining tugboats to harvesting kelp to building boats. This book not only gives us an insider’s perspective of careers sculpted by water, but the passion and inspiration that drives women to commit their lives to it.

—Julie Angus, author of Rowboat in a Hurricane: My Amazing Journey across a Changing Atlantic Ocean and Olive Odyssey: Searching for the Secrets of the Fruit That Seduced the World

Julie Angus, author, Rowboat in a Hurricane and Olive Odyssey

Mark Leiren-Young, author, The Killer Whale Who Changed the World and Never Shoot a Stampede Queen

Mark Leiren-Young, author, The Killer Whale Who Changed the World and Never Shoot a Stampede Queen

[T]he stories unfold like kitchen conversations, revealing personal dreams as well as accomplishments. Each woman, in her own way, has contributed to the betterment of all. As one says, “If I could help just one person, preferably a woman, reach a goal, and be a positive influence on the world around me, it’s all worthwhile.” An excellent resource for young women exploring career possibilities, as well as a primer to the concept of Cascadia.

Beckoned by the Sea is diverse, powerful, raw—words that describe both the ocean itself and the collective voices of two dozen women whose compelling stories Taylor brings to life in this vivid work. Taylor adeptly purses her prose to let the voices of these accomplished women drive the narrative and enrich our portrait of Cascadia. It’s an important book that sheds light on the long overlooked role of women in maritime industries and will hopefully inspire the next generation of female seafarers.

Eric Enno Tamm, author, Beyond the Outer Shores and The Horse That Leaps through Clouds

“Taylor’s cadence is solemn and stops just shy of worship. Her words are soft and carefully chosen. The tone is set as you embark on a new meditation in each category, or, in each facet of Cascadia. It’s intentional and, for the reader, soothing in a way, to be sung to like this. She loves this subject, she delighted in it as she wrote, and the reader reaps the benefits. ”

Other titles by Sylvia Taylor

A Deckhand's Tales of the BC Coast