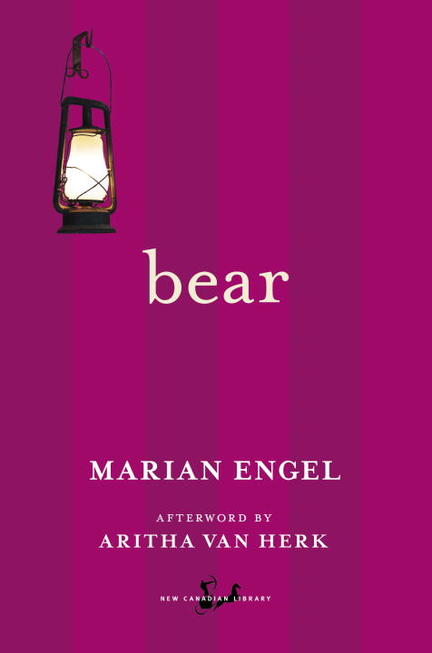 The winner of the Governor General’s Literary Award for Fiction, Marian Engel’s most famous – and most controversial – novel tells the unforgettable story of a woman transformed by a primal, erotic relationship. Lou is a lonely librarian who spends her days in the dusty archives of the Historical Institute. When an unusual field assignment comes her way, she jumps at the chance to travel to a remote island in northern Ontario, where she will spend the summer cataloguing a library that belonged to an eccentric nineteenth-century colonel. Eager to investigate the estate’s curious history, she is shocked to discover that the island has one other inhabitant: a bear. Lou’s imagination is soon overtaken by the island’s past occupants, whose deep fascination with bears gradually becomes her own. Irresistibly, Lou is led along a path of emotional and sexual self-awakening, as she explores the limits of her own animal nature. What she discovers will change her life forever. As provocative and powerful now as when it was first published. Includes a reading group guide.

Marian Engel was a Canadian novelist. Engel's best-known novel is Bear, and her other novels include No Clouds of Glory, The Honeyman Festival, The Glassy Sea, and Lunatic Villas. She won the Governor General’s Literary Award for Fiction for Bear in 1976, and was made an Officer of the Order of Canada in 1982. Marian Engel died in Toronto in 1985.

1  In the winter, she lived like a mole, buried deep in her office, digging among maps and manuscripts. She lived close to her work and shopped on the way between her apartment and the Institute, scurrying hastily through the tube of winter from refuge to refuge, wasting no time. She did not like cold air on her skin. Her basement room at the Institute was close to the steam pipes and protectively lined with books, wooden filing cabinets and very old, brown, framed photographs of unlikely people: General Booth and somebody's Grandma Town, France from the air in 1915, groups of athletes and sappers; things people brought her because she would not throw them out, because it was her job to keep them. "Don't throw it out," people said. "Lug it all down to the Historical Institute. They might want it. He might have been more of a somebody than we thought, even if he did drink." So she had retrieved from their generosity a Christmas card from the trenches with a celluloid boot on it, a parchment poem to Chingacousy Township graced with a wreath of human hair, a signed photograph of the founder of a seed company long ago absorbed by a competitor. Trivia which she used to remind herself that long ago the outside world had existed, that there was more to today than yesterday with its yellowing paper and browning ink and maps that tended to shatter when they were unfolded. Yet, when the weather turned and the sun filtered into even her basement windows, when the sunbeams were laden with spring dust and the old tin ashtrays began to stink of a winter of nicotine and contemplation, the flaws in her plodding private world were made public, even to her, for although she loved old shabby things, things that had already been loved and suffered, objects with a past, when she saw that her arms were slug- pale and her fingerprints grained with old, old ink, that the detritus with which she bedizened her bulletin boards was curled and valueless, when she found that her eyes would no longer focus in the light, she was always ashamed, for the image of the Good Life long ago stamped on her soul was quite different from this, and she suffered in contrast. This year, however, she was due to escape the shaming moment of realization. The mole would not be forced to admit that it had been intended for an antelope. The Director found her among her files and rolled maps and, standing solemnly under a row of family portraits donated to the Institute on the grounds that it would be impious to hang them, as was then fashionable, in the bathroom, announced that the Cary estate had at last been settled in favour of the Institute. He looked at her, she looked at him: it had happened. For once, instead of Sunday school attendance certificates, old emigration documents, envelopes of unidentified farmers' Sunday photographs and withered love letters, something of real value had been left them. "You'd better get packing, Lou," he said, "and go up and do a job on it. The change will do you good."

“The best Canadian novel of all time. . . . Engel’s prose turns swiftly from the comic to lyric and back again. . . . In part for its extravagant strangeness, for the disruption it poses to [Canadian] tradition, Bear deserves to be celebrated.”
--National Post

“A strange and wonderful book, plausible as kitchens, but shapely as a folktale, and with the same disturbing resonance.”
--Margaret Atwood

“Bear works as simply and mysteriously as a folktale. It is a remarkable tour de force.”
--New York Times

“A startlingly alive narrative of the forbidden, the unthinkable, the hardly imaginable.”
--Washington Post

“At once insightful and mysterious. . . . Bear is brave. We should be too.”
--Andrew Pyper

“It’s a modern Canadian fable . . . and, above all, totally readable.”
--Hazlitt Magazine

“An astounding novel, both earthy and mythical, which leads into the human self and also outward to suggest and celebrate the mystery of life itself.”
--Margaret Laurence, author of The Stone Angel

Other titles by Marian Engel

Marian and the Major

Engel's "Elizabeth and the Golden City"

Other titles by Aritha van Herk

An excellent chance to meet your reading goals , or to score a Book Club pick that everyone stands a chance of actually getting through.

It seems that Canadian literature is rife with stories of isolated characters and their slow creeping madnesses. And yes, some of them do end up engaging …

"Animals contribute immeasurably to our lives, aesthetically, emotionally and spiritually."