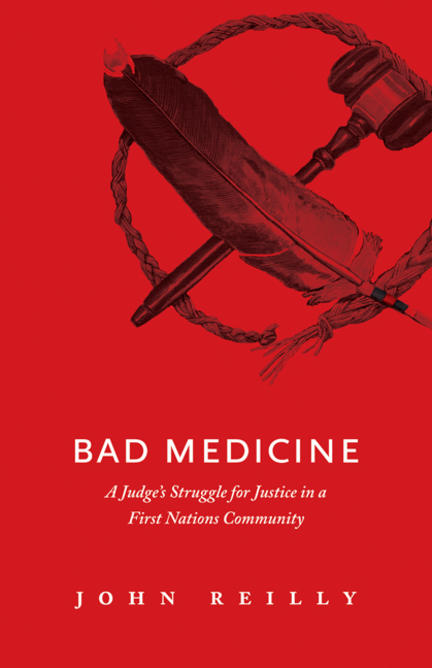 Early in his career, Judge John Reilly did everything by the book. His jurisdiction included a First Nations community plagued by suicide, addiction, poverty, violence and corruption. He steadily handed out prison sentences with little regard for long-term consequences and even less knowledge as to why crime was so rampant on the reserve in the first place.

In an unprecedented move that pitted him against his superiors, the legal system he was part of, and one of Canada’s best-known Indian chiefs, the Reverend Dr. Chief John Snow, Judge Reilly ordered an investigation into the tragic and corrupt conditions on the reserve. A flurry of media attention ensued. Some labelled him a racist; others thought he should be removed from his post, claiming he had lost his objectivity. But many on the Stoney Reserve hailed him a hero as he attempted to uncover the dark challenges and difficult history many First Nations communities face.

At a time when government is proposing new “tough on crime” legislation, Judge Reilly provides an enlightening and timely perspective. He shows us why harsher punishments for offenders don’t necessarily make our societies safer, why the white justice system is failing First Nations communities, why jail time is not the cure-all answer some think it to be, and how corruption continues to plague tribal leadership.

It's so upsetting to me that we have 650 of these communities across Canada and I think the majority of them have people living in poverty because we don't do anything to make sure the money that's designated for native affairs got to the people who need it. —The Calgary Herald, November 8, 2010

On the surface, Reilly's new memoir is nothing if not political. Bad Medicine ... is an angry book that finds the maverick judge naming names and pushing for widespread change in how the government deals with aboriginal communities.—Calgary Herald

Reilly’s fight-to-the-finish perseverance makes for an inspiring chronicle. Bad Medicine is a must-read for anyone who cares about the kind of country we really are.—Fil Fraser, Alberta Views

[John Reilly's] crusade has touched off a nationwide debate about government policies that are designed to foster native self-determination but may condemn another generation of Indians to lives of dependency and despair —Steven Pearlstein, The Washington Post

Judge Reilly’s order was a brave and crazy political stunt. There is little chance that his order will hold up on appeal, but that’s not the point. This man, this powerful white man who makes his living moving people from the scenic ghettos we quaintly call “reservations” to the even worse environment of prison, tried to do the right thing.—Nick Devlin, FFWD Weekly

Reilly has done a courageous and important deed. His unusual request has drawn widespread media attention to the ongoing problems on the Stoney reserve and has emboldened reserve residents to speak openly to the media.—Western Catholic Reporter

Judge John Reilly demonstrates an uncommon understanding of the complex issues and problems confronting Canada's Aboriginal peoples. Were everyone in Canada to share his perspectives we would be much further ahead in overcoming these challenges.—The Honourable Patrick Brazeau, Senator and former National Chief of the Congress of Aboriginal Peoples (CAP)

I must once again heap praise on Judge John Reilly’s recent book Bad Medicine. This best seller is a shining example of how breaking the code of secrecy and silence imposed by abusers can set people free to think and act well for their own benefit, and for the long-term benefits of their community.—Warren Harbeck, The Cochrane Eagle

Judge John Reilly wanted to expose wrongdoing on the Stoney reserve. What he didn’t realize was that powerful forces—in Ottawa, in Edmonton, and in the band itself—had a vested interest in ignoring the problem. —Gordon Laird, Saturday Night

At first it appeared little would come of Provincial Court Judge John Reilly’s order for an investigation into physical and political squalor on the Stoney Indian reserve, 30 miles west of Calgary….But now it seems Judge Reilly’s intervention has unleashed a maelstrom of activity: in the courts, in Ottawa—and especially in band offices, where frustrated Indians are taking matters into their own hands.—Alberta Report

. . . government dollars flow in, and many reserves get huge oil and gas revenues, but housing is pitiful, in some cases water is unclean, and social problems, unemployment and crime are all high. Why is this? Reilly had the courage to ask. He’s not alone.—Linda Slobodian, Calgary Sun

Judge Reilly has done the Stoneys a great service, firstly in recognizing the underlying issues which bring so many Stoneys before his court, and then by asking for an investigation. Many are hoping that at last something will be done.—Jeffrey Perkins

Bad Medicine is an insider’s look at the failure of the justice system in its dealings with Aboriginal law-breakers. Alberta Provincial Court Judge John Reilly spares no one, including himself, in his belief that a different and non-racist approach would serve First Nations more effectively. He makes a compelling case for “good” medicine to replace the “bad.” A must read for anyone connected with Canada’s legal system.—Catherine Ford, author of Against The Grain: An Irreverent View of Alberta

It’s possible that Bad Medicine is only the first in a series that takes the reader behind the curtains of the criminal justice system, aboriginal government and the difficulty in changing long-standing government policies. —Rocky Mountain Outlook