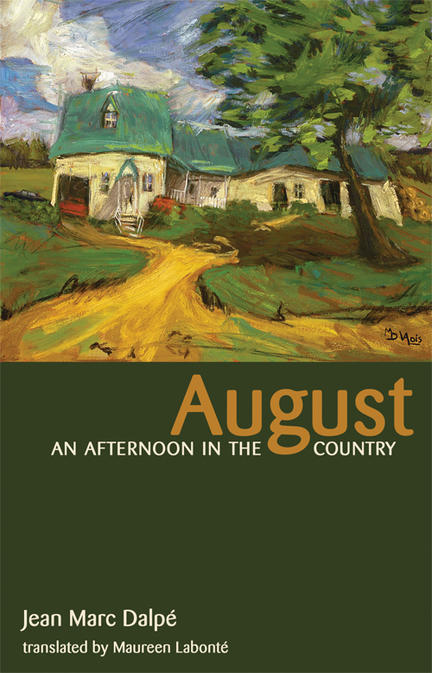 Monique has driven out from the city with her new fiancé, and a special dinner is being prepared to celebrate their upcoming wedding. But nothing is what it seems, and despite lazy, rambling conversations on the verandah and the comings and goings of a large household, cracks begin to appear and tensions mount, leading to a startling, explosive end to the afternoon. A taut family drama that chronicles the end of a way of life.

Jean Marc Dalpé
The tight and chiselled language of Jean Marc Dalpé allows those to speak who otherwise cannot. With simple words and powerful means, he breathes life into complex characters. His dramatic structures are relentless mechanisms born of the very texture of the universes he invents. In his theatre there is no judgment; only compassion.

Actor, poet and playwright, Jean-Marc Dalpé has twice been the recipient of a Governor General’s Award, for his plays Le Chien and Il n’y a que l’amour.

Maureen Labonté is a dramaturge, translator, and teacher. She has also coordinated a number of play development programs in theatres and playwrights” centres across the country. In 2006, she was named head of program for the Banff Playwrights Colony at the Banff Centre. She was dramaturge at the Colony from 2003–2005. She was also Literary Manager in charge of play development at the Shaw Festival from 2002–2004. Previous to that, she worked at the National Theatre School of Canada, first developing and running a pilot directing program and then coordinating the playwrighting programme and playwrights” residency. She still teaches at NTS.

Mauren has translated more than thirty Quebec plays into English. Recent translations include: The Bookshop by Marie-Josée Bastien, Everybody's WELLES pour tous by Patrice Dubois and Martin Labreque, and The Tailor's Will by Michel Ouellette. She will soon be starting work on: Wigwam by Jean-Frédéric Messier and Bienvenue à (une ville dont vous êtes le touriste) by Olivier Choinière.

"Août turns the heat way up and stirs that roiling cauldron of caustic bitterness only the most interesting families can muster. …Like Chekhov's unfortunates, Dalpé's characters owe their dysfunctions to the cultural shock of rapidly changing times." —The Montreal Gazette "Moving… disturbing. Dalpé's play is full of rhythm and finesse. Nothing escapes the mounting tensions, not even the humour that is present throughout."—Radio-Canada "Brilliantly constructed… a bold, audacious play which eschews plot in favour of a solid, dramatic situation which carries us through to the final catastrophe. Août stays with you long after you've left the theatre."—La Presse

Other titles by Jean Marc Dalpé

Scattered in a Rising Wind

Other titles by Maureen Labonté