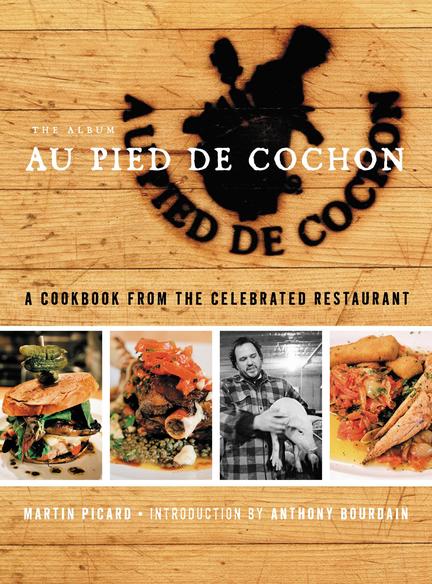 Mouth-watering recipes and the larger-than-life history of one of Montreal's most inspired and adventurous restaurants.

In this sumptuous album, Picard brings together fifty-five of his restaurant's recipes. Eschewing culinary fads, he pairs rustic comfort foods like stick-to-your-ribs poutine with a decadent slab of foie gras. There's no calorie-counting here: other over-the-top delicacies include Foie Gras Pizza, Venison "Chinese Pie" and, true to the restaurant's name, Braised Pigs' Feet.

But this is no ordinary cookbook. Recounting the wild story of the restaurant's beginnings and its passionate crew, the pages are imbued with Picard's exacting vision and illustrated with more than 600 photos and 50 original illustrations. Au Pied de Cochon is a celebration of pure cooking and pure indulgence from a kitchen where, in Bourdain's words, all is "delicious, pleasurable and true-and where too much of a good thing is never enough."

Martin Picard is the chef and proprietor of Au Pied de Cochon, one of Canada's most original and wildly popular restaurants, and of the Cabane a Sucre, a seasonal restaurant located on 130 acres of maple bush in Saint-Benoit-de-Mirabel in the Laurentian Mountains. He has been a professional chef since the 1990s, has worked with renowned chefs across the globe and was a member of the culinary team that opened Montreal's internationally acclaimed restaurant Toque. He has earned distinction for his mastery of Southern French cuisine to which he adds his own unique, contemporary twist. The author of the bestselling Au Pied de Cochon: An Album, he lives in Montreal, Quebec.

Anthony Bourdain is an American chef, author and television personality. His book, Kitchen Confidential: Adventures in the Culinary Underbelly, was a huge success and he went on to host the popular culinary and cultural adventure program Anthony Bourdain: No Reservations for the Travel Channel.

"A 'must-reads for the food-obsessed [this] whimsically illustrated cookbook is a spirited tribute to all things fatty,porky, ducky and starchy"

Food and Wine Best of the Best

"A publishing phenomenon...an unconventional cookbook...But it's a serious cookbook, full of professional insights"

"There's no question that Picard's irrepressible genius forms the nucleus of his Montreal restaurant, but more than anything, Au Pied de Cochon: The Album is a testament to the remarkable culture that has been generated over the last five years by Picard in collaboration with his skilled and imaginative equipe."