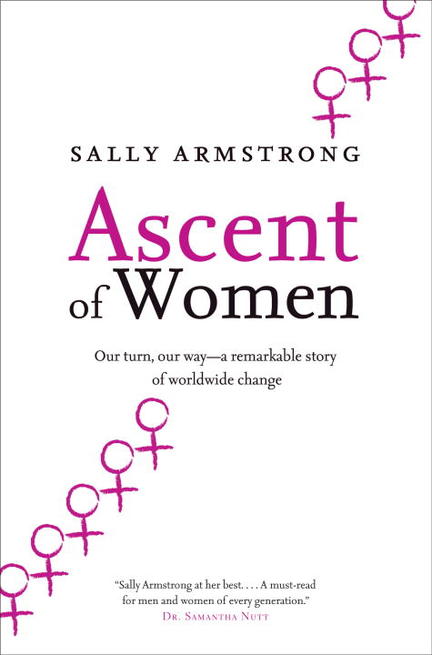 This book is about the final frontier for women: having control over your own body, whether in zones of conflict, in rural villages, on university campuses or in your own kitchen. Recent studies by economists such as Jeffrey Sachs and social scientists such as Isobel Coleman claim that women who gain such control--who are not oppressed--are the key to economic justice and the end to violence in developing countries around the world.

Ascent of Women will describe the perilous journey that brought women to this point. It will tell the dramatic and empowering stories of change-makers and examine the stunning courage, tenacity and wit they are using to alter the status quo. It is the story of a dawning of a new revolution, whose chapters are being written in mud-brick houses in Afghanistan; on Tehrir Square in Cairo; in the forests of the Congo, where women still hide from their attackers; and in a shelter in northern Kenya, where 160 girls between 3 and 17 are pursuing a historic court case against a government who did not protect them from rape.

Women revolutionaries in Toronto and Nairobi, Kabul and Caracas, New York City and Lahore are making history. Women the world over are marching to protest honour killing, polygamy, stoning and a dozen other religiously or culturally sanctified acts of violence. Sally Armstrong will bring us these voices from the barricades, inspiring and brave.

SALLY ARMSTRONG is an award-winning author, journalist, and human rights activist. She is the author of four bestselling books: Ascent of Women: A New Age Is Dawning for Every Mother’s Daughter, The Nine Lives of Charlotte Taylor, Veiled Threat: The Hidden Power of the Women of Afghanistan, and Bitter Roots, Tender Shoots: The Uncertain Fate of Afghanistan’s Women. Armstrong was the first journalist to bring the story of the women of Afghanistan to the world. She has also covered stories in conflict zones from Bosnia and Somalia to Rwanda, Afghanistan, Iraq, South Sudan, Jordan, and Israel. She is a four-time winner of the Amnesty International Canada media award, the recipient of ten honorary degrees, and an Officer of the Order of Canada. She was born and raised in Montreal, lives in Toronto, and spends the summer in New Brunswick.

“Sally Armstrong is the war correspondent for the world’s women. Striding into Taliban-held Afghanistan with a burka over her six-foot frame, playing high-fives with a traumatized child rape survivor in the Congolese jungle, marching with the defiant grandmothers in Swaziland, she explores the darkest reaches of women’s experience and brings back astonishing news of hope, challenge and change. From Tahrir Square to Senegal, Armstrong discovers that the sisters are doing it for themselves—and revolutionizing the world.”
—Michele Landsberg, author of Writing the Revolution

“This book is Sally Armstrong at her best: engaging storytelling peppered with thoughtful analysis and passionate activism. Ascent of Women is at once heart-wrenching and inspiring, and a powerful reminder that the struggle for women’s equality continues. A must-read for men and women of every generation.”
—Dr. Samantha Nutt, author, Damned Nations, and founder, War Child

“Around the world, away from the spotlight, women and girls are overcoming tremendous obstacles to insist on their rights. Sally Armstrong found them when few other journalists even cared to know their names. This is their story. And our inspiration—a triumph of women’s empowerment and Sally Armstrong’s deep humanity and visionary journalism.”
—Anna Maria Tremonti, host of The Current on CBC Radio One

“This is not a book that romanticizes a small group of revered heroines but instead provides us such profound hope of how truly global, boundless and unstoppable the ascent of women and their leadership is. Armstrong’s clear prose, her funny anecdotes, and her keen sense of a huge untold story made this book so hard to put down. Through each chapter you learn how women’s rights activists are actually tackling the most difficult and protracted social and economic challenges of our time. This is a book the world needs to read.”
—Joanna Kerr, Chief Executive, ActionAid International

Other titles by Sally Armstrong

The Uncertain Fate Of Afghanistan's Women

The Nine Lives of Charlotte Taylor

The Hidden Power Of The Women Of Afghanistan

Our Women of the Year