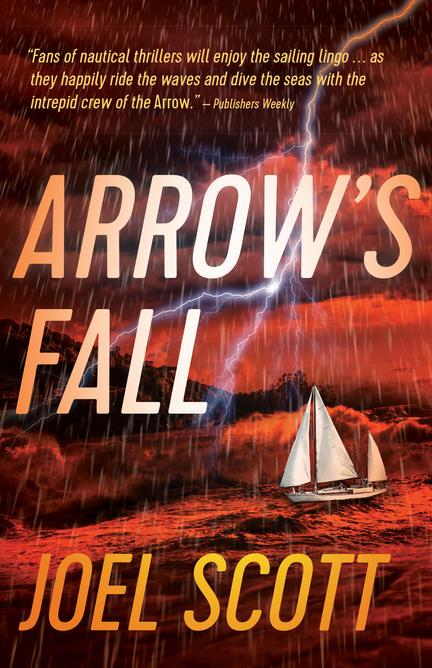 In this follow-up to 2018’s Arrow’s Flight, a tale of an 18th-century sunken ship and a fortune in gold sends Arrow and her crew on a venture that seems harmless enough. That is, until it attracts the attention of the flamboyant owner of the Golden Dragon, a 240-foot sailing machine crewed by cashiered ex-marine Lord Barclay Summers and his band of mercenaries. When Arrow and her crew are viciously attacked, they seek shelter in the treacherous Great Sea Reef where they become ensnared in a life-and-death sailing match against the murderous crew of the Golden Dragon.

Continuing the same heart-pounding excitement of Arrow’s Flight, Joel Scott weaves together terrific storytelling, breathtaking action, and an in-depth knowledge of sailing. Arrow’s Fall will be a battle of instinct versus science, old versus new, wood and cloth against steel and technology, with destruction and death waiting on a missed tack.

Joel Scott completed a four-year circumnavigation and worked as a fisherman, a yacht broker, and a librarian. He is a two-time winner of the Cedric Literary Award. A lifelong sailor, he currently lives and sails out of Chemainus, British Columbia.

“Fans of nautical thrillers will enjoy the sailing lingo . . . as they happily ride the waves and dive the seas with the intrepid crew of the Arrow.” — Publishers Weekly

“I once read Hemingway's Islands in the Stream aloud in a tent, by flashlight, to a friend. There is something about Scott's long poetically complex sentences, lyrical phrasing, and island scenes that cast me back there as I read this book . . . Scott's writing is, at times, intoxicating.” — Ottawa Review of Books

“The writing is lively and the dialogue entertaining. The settings are expertly drawn from extensive personal experience by the author, and described in loving and sometimes lyrical stretches of prose . . . this is a fine and rollicking adventure story set in lovingly-drawn locations.” — The Ormsby Review

Other titles by Joel Scott