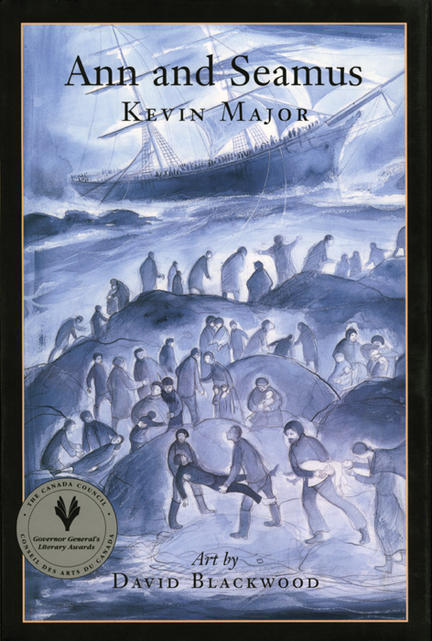 Seventeen-year-old Ann Harvey is one of the great unsung heroes of maritime history. In 1828, off the Newfoundland fishing village of Isle aux Morts, Ann Harvey, her father and younger brother, came upon the wreck of the Despatch, an Irish immigrant ship originally destined for Quebec City. In thick fog and fierce wind it had run aground. Ann's courage and strength at the oars of the rescue boat were largely responsible for saving more than 160 dirt-poor passengers stranded amid the raging storm, left "like seabirds clinging to the rocks." Ann's courageous feat along the isolated south coast of Newfoundland has been all but forgotten.

Ann and Seamus brings the remarkable story of Ann Harvey to today's readers. In a poetic and powerful retelling, Kevin Major portrays the shy young woman thrust into extraordinary circumstances. It is the story of dramatic rescue, but it is also the story of dreams and fate, of a hard life and young love. For also at its center is Seamus, a young Irishman who had set sail with hopes of a new life in America. Ann and Seamus is historical fiction that sweeps across ages and nationalities. In rich yet accessible narrative verse, it draws the reader into the drama of sea rescue without losing the tender and impetuous voices of youth at the core of the story.

This is an adventure, coming-of-age, and love story, all set within vividly evoked Newfoundland history and presented through stunningly immediate poetry.

The surge of the language, and the intensity and elemental simplicity of the action and characters, make this a book that lives on in the imagination, a book to read aloud, a book to press on friend both teenage and adult.