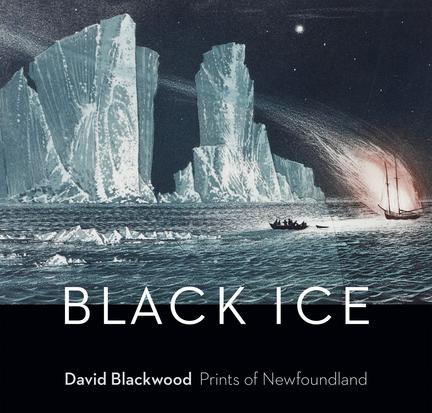 A lush tribute to both an iconic Newfoundland artist and the vibrant culture his work depicts.

Canadian artist David Blackwood has been telling stories about Newfoundland in the form of epic visual narratives for the past 30 years. His stories draw on childhood memories, dreams, superstitions, the oral tradition and the political realities of the community on Bonavista Bay, where he was born and raised. His collection of works has created an iconography of Newfoundland that is as universal as it is personal, as mythic as it is rooted in reality, and as timeless as it is linked to specific events.

Black Ice -- a comprehensive and sumptuously illustrated retrospective -- features over 70 prints spanning 40 years of the artist's work and features essays by Blackwood, Michael Crummey, Sean Cadigan and the Art Gallery of Ontario's Dr. Katharine Lochnan. It also features essays by scholars based in Canada and Ireland, including an essay on the environment by Dr. Martin Feely, Head of Earth Sciences at the National University of Ireland in Galway (in collaboration with Dr. Derek Wilton, Department of Earth Sciences, Memorial University) and an article on mumming by Caoimhe Ni Shuilleabhain.

This book was published in partnership with the Art Gallery of Ontario.

Dr. Katharine Lochnan is the Art Gallery of Ontario's Deputy Director of Research and R. Fraser Elliott Curator of Prints and Drawings. She has edited or written several previous books, including David Milne Watercolours and Turner, Whistler, Monet.

"Sometimes a great artist appears just at the point of historical shift and catches the essence of a region and time...The Newfoundland of boats and cod, of mummers and sealers, the brilliant flags, the hoarse voices of foghorns, ice aloof and jagged, the mug-ups and ktichen times, the coffin in the boat have become inseparable from the name of David Blackwood."

"The book offers not only something for art lovers, but historians also. David Blackwood's work resonates with images and emotions, that would make even those who do not care for art, sit up and take notice. 5 Bookmarks (out of five)."

"Compiling traditions and superstition tied to the region that is unlike any other in Canada, the artwork seeks to capture the soul of Newfoundland in full color. Moving and exciting work drawn from galleries all over the world, Black Ice would do well in any cultural collection...as an excellent coffee table art book."

"Behind Blackwood's primitive-looking prints is a deeply civilized attempt to capture the fading world of outport Newfoundland. This book, coinciding with the artist's 70th birthday, explores the sources of his art, and ranges from his home province's geology to its folk customs."

"Black Ice is a critically important text offering readers a much-needed appreciation of Blackwood's work and is one of the best books on a Canadian artist."

Other titles by Katharine Lochnan

Selected Works on Paper from the Renaissance to Modernism

Painting toward the Light