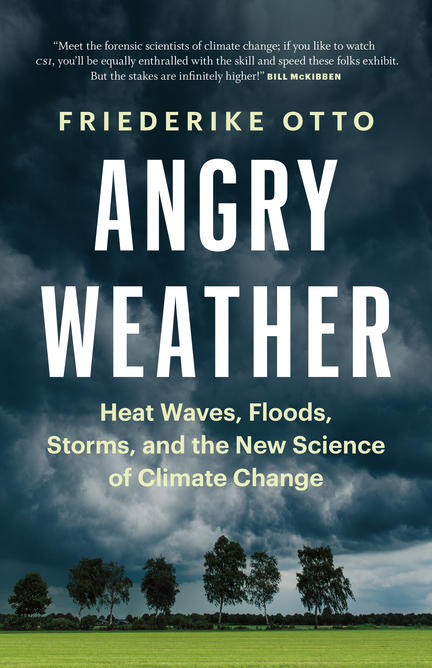 A TIME 100 Most Influential Person of 2021: Friederike Otto

“Meet the forensic scientists of climate change; if you like CSI, you’ll be equally enthralled with the skill and speed these folks exhibit. But the stakes are infinitely higher!”—Bill McKibben, author of Falter and The End of Nature

Angry Weather tells the compelling, day-by-day story of Hurricane Harvey, which caused over a hundred deaths and $125 billion in damage in 2017. As the hurricane unfolds, Otto reveals how attribution science works in real time, and determines that Harvey’s terrifying floods were three times more likely to occur due to human-induced climate change.

This new ability to determine climate change’s role in extreme weather events has the potential to dramatically transform society—for individuals, who can see how climate change affects their loved ones, and corporations and governments, who may see themselves held accountable in the courts. Otto’s research laid out in this groundbreaking book will have profound impacts, both today and for the future of humankind.

Published in Partnership with the David Suzuki Institute.

FRIEDERIKE (FREDI) OTTO is a physicist, climate researcher, associate professor, and the acting director of the Environmental Change Institute at the University of Oxford. Otto is also a co-investigator on the international project World Weather Attribution, which assesses the human influence on extreme weather and has been profiled in the New YorkTimes, Nature, and others.

“A good overview of the climate-change issue … the evolution of climate change in the industrial era, the politics over the issue, and the responsibilities of the industrialized world—in particular, corporations and governments—to help repair the damage. The result is a most timely book.”
—Booklist

“For the fact-minded, Otto’s arguments are incontrovertible.”
—Kirkus Reviews

“This elegant new branch of climate science …[will] have profound implications for public policy and planning, and will lead to even more useful research in the future.”
—Vancouver Sun

“Angry Weather is all about science, but it is not all technical. It is a readable book for those who have limited knowledge of weather and climate systems. Otto provides succinct scientific explanations throughout the book to ensure her main points are supported by science but still understandable and relevant to the main message.”
—Alternatives Journal

“Attribution science—climate forensics, or reverse engineering—is a new discipline explained in this book with passion and verve by one of its creators. Fredi Otto is destined to be one of those rare scientists whose name becomes well known in the wider world.”
—Mark Denny, author of Making Sense of Weather and Climate: The Science Behind the Forecasts

“Angry Weather introduces us to the forensic scientists of climate change; if you like to watch CSI, you’ll be equally enthralled with the skill and speed these folks exhibit. But the stakes are infinitely higher!”
—Bill McKibben, author of Falter: Has the Human Game Begun to Play Itself Out?

“[A] thrilling work of nonfiction... If readers were holding any doubt about climate’s effects on weather before picking up this book, that doubt will be eviscerated before the last gripping page.”
—Literary Hub

“This fascinating book takes us on a voyage across the cutting edge of climate science that irrevocably alters our perspective of the world in which we live and the future it holds. I wish I could make this book required reading for the world.”
—Katharine Hayhoe, UN Champion of the Earth