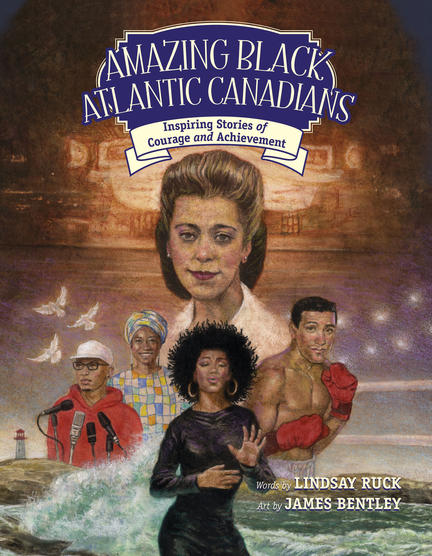 Among these amazing Black Atlantic Canadians are people who saved lives, set sports records (Delmore William “Buddy” Daye), achieved international superstardom (Measha Brueggergosman), made change in their own neighbourhoods (Quentrel Provo), overcame injustice (Viola Desmond), and enacted many other inspiring deeds of courage and perseverance. With dozens of profiles on both historical and contemporary Black people from Atlantic Canada, Lindsay Ruck celebrates the accomplishments of some of our region’s amazing Black heroes.

Lindsay R. Ruck, born in Dartmouth, Nova Scotia, is a graduate of Carleton University's School of Journalism in Ottawa. Since graduating in 2008, she has worked in the marketing, communications and publishing fields. Similar to her grandfather, the late Calvin W. Ruck, she has a deep and abiding respect and affection for her home province of Nova Scotia. She has recently returned to Halifax, after living in Ottawa for twelve years, to further her career as a writer and editor.

James Bentley lives and works on the small island of Île-Perrot, just off Montreal, Québec. He studied and began his career as a freelance illustrator; a practice which gave him a great love for drawing. Anchored in figuration, he now works mainly with acrylic on canvas and acrylic and pastel on paper. Bentley's current body of work is focused on the ocean, portraits, and figure studies. He is always on the search to paint in an inventive, open manner.

Other titles by Lindsay Ruck

A Biography of Dr. John Savage

Other titles by JAmes Bentley

Fascinating Stories of Excellence and Determination

Awesome Stories of Bravery and Adventure