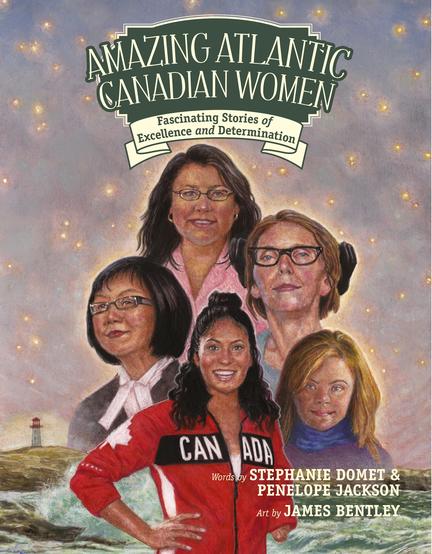 The third installment in the celebrated illustrated series about Amazing Atlantic Canadians, featuring incredible women from across the region.

You've likely heard of some of the most famous women from Atlantic Canada – women like activist Viola Desmond, painter Maud Lewis, and singer-songwriter Anne Murray. But this book celebrates some amazing women you may not have heard of, like pioneering radio producer Betty Riley, lawyer Linda Lee Oland, or engineer Mona El-Tahan.
With profiles of over 70 amazing women past and present from Nova Scotia, New Brunswick, Prince Edward Island, and Newfoundland and Labrador, authors Stephanie Domet and Penelope Jackson share incredible stories of women who have overcome adversity, excelled in STEM fields, established successful creative careers, and bravely led change. Featuring informative sidebars, an index, and 20 original colour illustrations from artist James Bentley.

I grew up in Mississauga, Ontario and lived there till I came to my senses and moved to downtown Toronto, where I lived till I REALLY came to my senses and moved to Halifax, Nova Scotia. Ahhh, that’s better.I started writing soon as I figured out how to hold a pencil. I have done very little in the way of developing other skills, though I am reasonably good at talking on the radio, and I am a pretty great cook.I wrote Homing in November 2003 for NaNoWriMo…actually, I took on the challenge for a radio story for CBC’s Definitely Not the Opera. I was working there at the time, my colleagues liked my pitch, I experienced a brief moment of triumph before the head-splitting realization set in that, god damn it, I was going to have to write a novel.I procrastinated, blardy blardy blah, ended up writing several tens of thousands of words in about three days near the end of November, ended up with a finished, but flawed manuscript, and spent the next few years alternately polishing and ignoring it.Then along came Robbie from Invisible Publishing with an offer to make it into a book, and that was that.Homing won the Margaret and John Savage First Book Award in 2008. I had such an outer body experience when they called my name, I didn’t even turn to look at, let alone kiss, my husband. I just bolted for the podium to accept my award. Because I am all class.I am working on another novel. It’s called Fallsy Downsies, and it’s about a bunch of singer songwriters who end up spending a lot of time crammed in a car, heading west. It’s loads of fun to write, when I get around to it.Homing was optioned by Lady Hammond Entertainment in spring 2009, and I am writing the screenplay. I sound so confident when I put it that way, don’t I?

Penelope Jackson is the co-author, with Melinda McCracken, of Papergirl, a middle-grade novel about the Winnipeg General Strike of 1919. An editor and ghostwriter of children's and adult books for almost twenty years, Penelope is also a songwriter and gardener. She lives with her family in Halifax.

James Bentley lives and works on the small island of Île-Perrot, just off Montreal, Québec. He studied and began his career as a freelance illustrator; a practice which gave him a great love for drawing. Anchored in figuration, he now works mainly with acrylic on canvas and acrylic and pastel on paper. Bentley's current body of work is focused on the ocean, portraits, and figure studies. He is always on the search to paint in an inventive, open manner.

"Whether these women intended to become activists or their small actions drew attention and accolades, the women included in Amazing Atlantic Canadian Women: Fascinating Stories of Excellence and Determination are excellent examples of how individuals can do great things, create lasting change, and inspire others to fight injustice.....With the book's including women from the past to those active today, readers of all genders will find themselves asking, "If they can do it, why can't I?!."
— CM Reviews, Highly Recommended

Other titles by Stephanie Domet

Other titles by Penelope Jackson

Females in the Frame

Other titles by JAmes Bentley

Inspiring Stories of Courage and Achievement

Awesome Stories of Bravery and Adventure