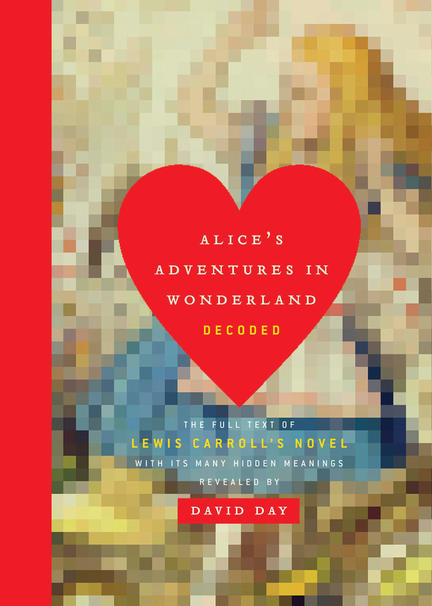 This gorgeous 150th anniversary edition of Alice's Adventures in Wonderland is also a revelatory work of scholarship.

Alice's Adventures in Wonderland--published 150 years ago in 1865--is a book many of us love and feel we know well. But it turns out we have only scratched the surface. Scholar David Day has spent many years down the rabbit hole of this children's classic and has emerged with a revelatory new view of its contents. What we have here, he brilliantly and persuasively argues, is a complete classical education in coded form--Carroll's gift to his "wonder child" Alice Liddell.
In two continuous commentaries, woven around the complete text of the novel for ease of cross-reference on every page, David Day reveals the many layers of teaching, concealed by manipulation of language, that are carried so lightly in the beguiling form of a fairy tale. These layers relate directly to Carroll's interest in philosophy, history, mathematics, classics, poetry, spiritualism and even to his love of music--both sacred and profane. His novel is a memory palace, given to Alice as the great gift of an education. It was delivered in coded form because in that age, it was a gift no girl would be permitted to receive in any other way.
Day also shows how a large number of the characters in the book are based on real Victorians. Wonderland, he shows, is a veritable "Who's Who" of Oxford at the height of its power and influence in the Victorian Age.
There is so much to be found behind the imaginary characters and creatures that inhabit the pages of Alice's Adventures in Wonderland. David Day's warm, witty and brilliantly insightful guide--beautifully designed and stunningly illustrated throughout in full colour--will make you marvel at the book as never before.

David Day was born and raised in Victoria, B.C. He has lived in Britain, Greece, Spain and currently Toronto. He is poet and author of over forty books of poetry, ecology, history, natural history, fantasy, mythology, and fiction. He has also written for theatre, television, ballet, national and international newspapers and magazines. He has written a dozen books of natural history and ecology, including: The Doomsday Book of Animals (named a Time Magazine ‘Book of the Year’), The Whale War, Eco Wars, and most recently NEVERMORE: A Book of Hours. He has also writetn a book of ecology for children, Noah’s Choice: True Stories of Extinction and Survival. Although best known internationally for his best-selling books on fantasy and mythology, such as A Tolkien Bestiary, Castles, Tolkien’s Ring, The Hobbit Companion and Quest for King Arthur; David Day has also written ten children’s picture books, including: The Sleeper, The Swan Children, The Big Lie, Aska’s Animals, Tippu and The King of the Woods. His books – for both adults and children – have been translated into twenty languages. Eric Beddows is an artist and illustrator working in Stratford, Ontario. He has won numerous awards for his illustrations, including the Governor General's Award for The Rooster's Gift, the Amelia Frances Howard-Gibbon Award for the Zoom books, and the International Ezra Jack Keats Award bronze medal. For The Emperor’s Panda, he won the IBBY International Books for Young People Illustrator’s Book of the Year (Canada) Award. Eric is currently writing and illustrating a trilogy of tales of the Northern Gothic to be entitled Thistledown Stories.

"This is the kind of book that could keep list-makers for an alternate-universe Buzzfeed site busy forever. . . . Day's book proves . . . that Carroll's work, and its indefatigable young protagonist, is itself a rabbit hole of mystery waiting to be discovered." —Quill & Quire
"For an exhaustive and entertaining account of how Lewis Carroll amused contemporaries in his favourite children's story, it may be impossible to top David Day's Alice's Adventures in Wonderland Decoded." —The Vancouver Sun
"It's no surprise to Lewis Carroll fans and scholars that Wonderland is a rich, multi-layered text. But Day's work engages and enlightens the casual reader in a way few scholarly works can, and the beautiful book makes for an essential keepsake for any Alice lover." —New York Daily News
"The book has never been out of print and each year brings new editions of—and books about—Alice in Wonderland. . . . Standouts this year include the beautifully illustrated and organized Alice's Adventures in Wonderland Decoded." —Chicago Tribune
"We all think we know Alice’s Adventures in Wonderland, but David Day's seductively scholarly new look at the background to the tale reveals the rich and labyrinthine workings of its creator and the Victorian mindset that inspired it. His lively, thoroughly researched investigations expand and enlarge all our ideas about the Alice story, and give a whole new life to a much-loved classic." —Michael Palin
"I've been reading the Alice adventures since my childhood, and David Day's book is the one I would have wanted to write, had I his talent, wit and wisdom. Decoded is the perfect vade mecum for all travellers, new and seasoned, who venture into Alice's realms. In the words of the poet, 'O frabjous Day!'" —Alberto Manguel, author of A History of Reading
"David Day combines the expertise of an academic with the fervor of a true Alice enthusiast. . . . In a remarkable act of literary excavation, Day exposes the historical references, classical allusions and subtly disguised symbols that he thinks Carroll embedded in the tale of Wonderland as lessons for his protégé, Alice Liddell. The volume includes Carroll's novel in full, supplemented by Day's observations as he painstakingly traces the various themes—music and philosophy, mathematics and poetry—that run through Carroll's narrative, proving along the way that Alice, even as it celebrates the absurd, exhibits airtight logic. Richly illustrated, this is a book Alice addicts will find irresistible." —BookPage
"David Day is the first author to demonstrate a complete understanding of the many mathematical ideas that lie below the surface in Lewis Carroll's classic fairy tale. No other author, including Martin Gardner and the editors of the many editions of Alice's Adventures in Wonderland that have appeared in the past have undertaken this very important task. Day's interpretations are creative in both the literary and mathematical sense, and most importantly, are valid." —Francine Abeles, Professor Emerita, Department of Mathematics, Kean University, and editor of The Mathematical Pamphlets of Charles Dodgson
"Day has succeeded in making his thoroughly researched and persuasively argued book appealing also for lovers of Alice as well as for general readers interested in Victorian literature and society." —Library Journal

Other titles by David Day

The Heroes of Tolkien

The Battles of Tolkien

A Book Of Hours