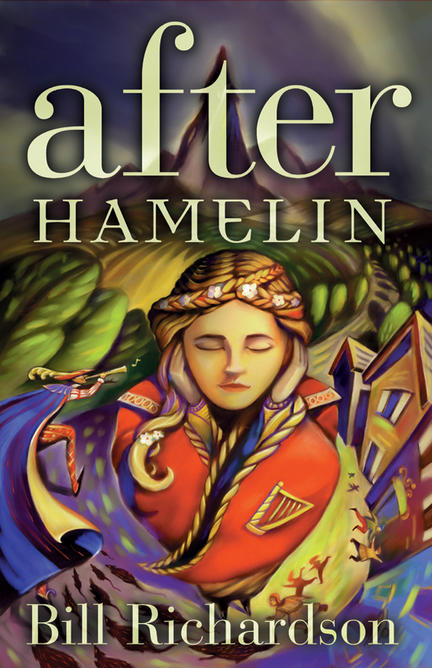 After Hamelin picks up the story where the Browning poem and other tellings of The Pied Piper of Hamelin leave off. Told with a sense of adventure and humor, the author uses inventive wordplay and uninhibited imagination to spin a narrative tale through strange lands inhabited by characters both good and evil.

Penelope is now 101 years old, but as a child she was struck deaf on her eleventh birthday, the day the Pied Piper stole the town’s children. Spared that fate, she accepts the quest to find the evil piper and bring the stolen children back. She tracks them through dangerous terrain, into the belly of a mountain, to a lost city. Before their adventure is over, Penelope and her companions use their wits and talents to rescue the missing children—standing against human, animal, and supernatural forces in order to triumph. "

MICHAEL MARTCHENKO has illustrated dozens of books, and is most famous for his work with Robert Munsch, including Smelly Socks (Tes chaussettes sentent la mouffette!), Makeup Mess (Maquillage à gogo) and We Share Everything! (On partage tout!). He lives in Burlington, Ontario.

“This quest story harbors echoes of both Oz and Wonderland, with touches of their humor and a good helping of their darkness ... excellent fantasy.”—VOYA

“... brilliant new novel ... Along the way, a wonderful story unfolds, a story propelled in good part by a joy in language, and a belief in its powers. There are songs an rhymes, poems, skipping chants and incantations. The reader is with the story, enchanted, one might say, all the way to its resolution ...”—Vancouver Sun

“Blending aspects of classical myth and literary fantasy, the tale builds to a fine resolution and casts a hypnotic spell.”—Booklist

A Roundup of Truly Canadian Tales and Letters

Other titles by Michael Martchenko

I Can Fix It