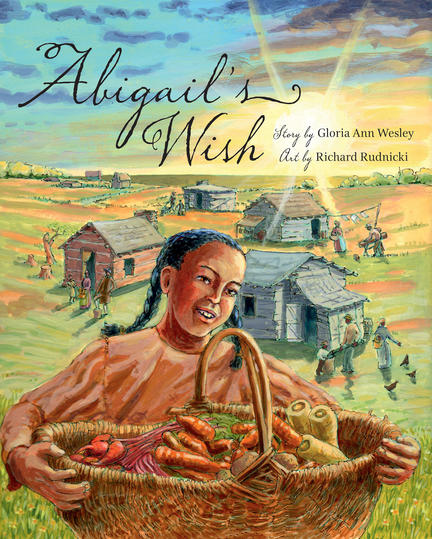 Ten-year-old Abigail Price is excited about spring in her new home in Birchtown. Spring means lots of things, like flower buds and fresh leaves and her Aunt Dinah's new baby. She's hoping it also means she'll get a new dress to wear for the celebration, but new clothing, like many things, is hard to come by.

The first children's picture book set in historic Birchtown, Nova Scotia, Abigail's Wish is a window into the life of a Black Loyalist family in the early years of the historic colony. Through the eyes of young Abigail, this stunning collaboration between poet and novelist Gloria Ann Wesley and award­winning illustrator Richard Rudnicki will teach readers about Black Loyalist life, and the value of friendship and patience.

Gloria Ann Wesley is an African Nova Scotian writer who published her first book of poetry, To My Someday Child in 1975. She later published Woman, Sing (2002) and Burlap and Lace (2007). Her first young adult fiction, Chasing Freedom, was published in 2011.

Wesley’s poetry appears in three Canadian anthologies: Canada in Us Now (Harold Head, 1976), Other Voices: Writings by Blacks in Canada (Lorris Elliott, 1985) and Fire on the Water (George Elliott Clarke, 1992). Gloria Wesley holds the distinction of being the first published Black Nova Scotian poet (by Resolution of the Nova Scotia Legislature, 5 April 2007).

Richard Rudnicki is an artist known for his paintings of Nova Scotia as well as for his award-winning children's books. Gracie, The Public Gardens Duck by Judith Meyrick won the Lillian Sheppard Memorial Award for Excellence in illustration and was finalist for the APMA Best Atlantic Published Book Award. Richard also teaches figure drawing and portraiture and frequently gives school workshops. He lives in Halifax, Nova Scotia.

Other titles by Gloria Ann Wesley

An African Nova Scotian Community Is Demolished — and Fights Back

If This Is Freedom

Other titles by Richard Rudnicki

Gus the Tortoise Takes a Walk

I Spy a Bunny