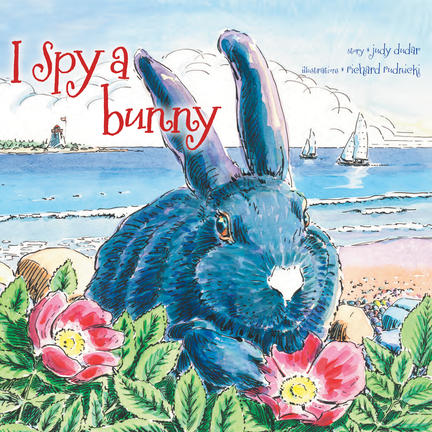 Mandy and her Aunt Carla are spending the day at Nova Scotia's White Point Beach. They are playing I Spy, but Mandy can't see the white-nosed bunny Aunt Carla spies!
On each page, Mandy sees another beautiful part of White Point. There are surfers out in the water and families playing on the beach. There are big rocks to climb and colourful chairs to relax in. Mandy spies white in the waves, in the sand, in the lighthouse, and even in a white-capped chickadee- and just before she snuggles into Aunt Carla for a nap, she finally sees the little black bunny with a white nose.
This is a wonderful book to read aloud to young children and for early readers to read themselves, especially those who are learning their colours and who love bunny rabbits!

Judy Dudar is Albertan by birth but Nova Scotian by choice. She has travelled extensively and has lived in Calgary, Edmonton, Vancouver, Oslo, London, and Nyangao, Tanzania. She has a PhD in English Literature and has taught at all levels from preschool to university. She has published academically as well as written book reviews and magazine articles. She lives in Halifax, Nova Scotia.

Richard Rudnicki is an artist known for his paintings of Nova Scotia as well as for his award-winning children's books. Gracie, The Public Gardens Duck by Judith Meyrick won the Lillian Sheppard Memorial Award for Excellence in illustration and was finalist for the APMA Best Atlantic Published Book Award. Richard also teaches figure drawing and portraiture and frequently gives school workshops. He lives in Halifax, Nova Scotia.

I Spy a Bunny

Fascinated by the colours in the world around her, Mandy loves to play “I Spy” with her Aunt Carla. On a daytrip to White Point Beach, on Nova Scotia’s South Shore, there is so much to see and learn, and the “I Spy” game expands. “I spy with my little eye something that is white,” challenges Aunt Carla. Mandy begins to search her environment. Could it be the white waves? The white sand? The blackcapped chickadee? The white lighthouse? After each guess her aunt says encouragingly, “Yes, but there is more! Keep looking!” Eventually Mandy, too tired to continue with the game, settles down for a nap. It is only then that she spots a black bunny with a white nose, which has been following her from the moment of her arrival at the beach.

Author Judy Dudar has written a charming story about a child who loves to explore. The writing is simple, and one senses Mandy’s wonder in what she discovers and the gentle mentoring of an important adult in her life. This is a fine book to read aloud to children, and one that young readers can read themselves. The colourful print, coordinated with the object being viewed, also adds interest.

Richard Rudnicki’s acrylic paint, pen and ink illustrations capture the natural beauty of White Point Beach, as well as the changing expressions of the characters. He uses a variety of perspectives such as closeups and bird’s eye views. It seems as though the discovered bunny might well run off the final page towards the reader. Rudnicki’s clever addition of the bunny hiding throughout this book will amuse astute readers, who will feel as if they have been let in on a secret that Mandy has missed.

I Spy a Bunny has a wonderful sense of place and motion. If only we could view the world through Mandy’s wonderfilled eyes!

Other titles by Richard Rudnicki

Gus the Tortoise Takes a Walk